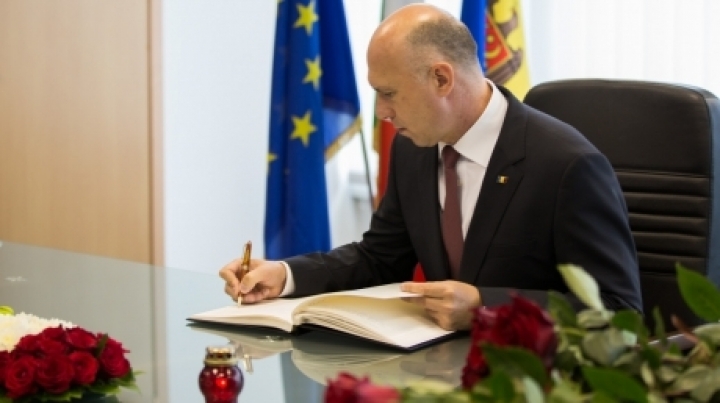 Prime Minister Pavel Filip laid today flowers and signed the book of condolences in memory of victims of the earthquake on Wednesday, 24 August 2016, in the central region of Italy, the government’s communication and media relations department has reported, Moldpres informs.

Chief of the Cabinet expressed condolences to Italian authorities and the people on behalf of him personally, the Government and the citizens of Moldova. Also, Pavel Filip expressed his sympathy for people and their families who have suffered from the earthquake, stressing that Moldova is with them in these difficult moments.

"It is a big tragedy for us too, as in this area live over 15 thousand citizens of Moldova. Unfortunately, nature sometimes brings us unpleasant surprises. In fact, it is a signal and we must think all upon the actions that we do daily. Regretfully, we have to go through these difficult moments.  condolences to all the Italian people," said Prime Minister Pavel Filip in his statements to journalists after signing the condolence book.

On the morning of 24 August this year, in Italy it was registered an earthquake with a magnitude of 6,2 degrees, resulting in multiple casualties and property damage. According to the latest information, including victims, there are not citizens of the Republic of Moldova.