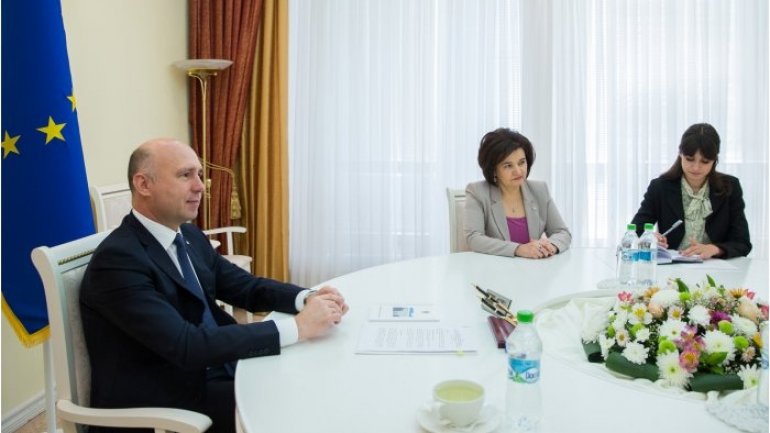 Prime Minister Pavel Filip today had a meeting with the special representative of the Russian president for cultural cooperation Mikhail Shvidkoy, Moldpres reports.

The PM welcomed the visit to Chisinau by the Russian official, stressing that there are pre-requisites for promoting a pragmatic and advantageous Moldovan-Russian dialogue, in the interests of the citizens from the two countries. In the context, Pavel Filip highlighted the constructive character of the discussions with Russian President Vladimir Putin and Prime Minister Dmitry Medvedev at meetings of the Commonwealth of Independent States (CIS). The prime minister said that the problems can be overcome when there is will and pragmatic approach. “We should start from identifying solutions to smaller problems, in order to get to overcoming big ones,” the prime minister noted.

In the context, Pavel Filip said that, next year, Moldova and Russia would mark the 25th anniversary of the establishment of diplomatic relations and the Moldovan government would make sustained efforts to deepen the dialogue and the bilateral cooperation, including in the culture and science sectors.

In the same context, the PM appreciated the holding of the Russian Film Days in Chisinau, as well as the inauguration of a monument to Moldovan Ruler Dimitrie Cantemir on the area of the State Museum-Reserve Tsaritsyno from Moscow.

For his part, Mikhail Shvidkoy said he had a special attitude towards Moldova, as his grandfather was born here, as well as for the friendship ties he had with culture people from Moldova. The Russian president’s special representative for cultural cooperation confirmed willingness to back the promotion of the Moldovan culture in Russia, stressing that the cultural dialogue contributes best of all to strengthening the friendship ties between the countries. The Russian official referred also to the opportunity to deepen the bilateral cooperation in the science field, especially in the agro-chemical sector and the one of producing seeds.

In the end of the meeting, Prime Minister Pavel Filip expressed the government’s openness for extending the Moldovan-Russian bilateral relations, stressing, in this respect, the importance of a meeting of the Moldovan-Russian joint inter-governmental commission for economic cooperation, due in late November this year.
AFLĂ imediat Știrile Publika.MD. Intră pe Telegram