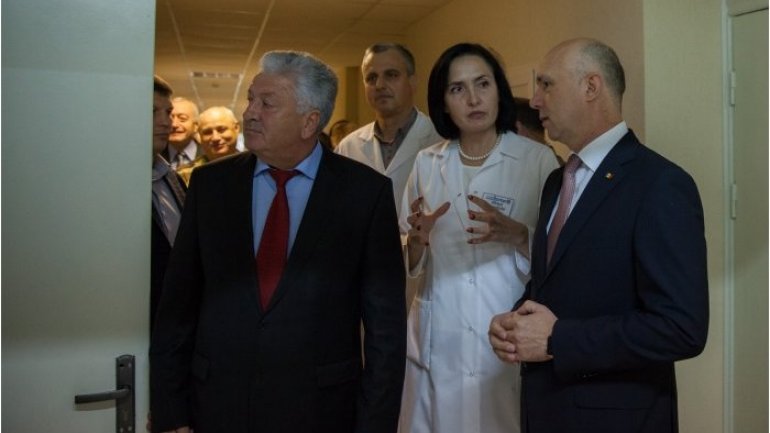 At a visit paid to the state enterprise, Republican Experimental Centre of Prosthetics, Orthopedy and Rehabilitation (CREPOR), Pavel Filip discussed with the heads of the war veterans’ associations and the centre’s leadership problems faced and measures, due to be undertaken to improve the services provided to the Centre’s patients.

During the visit, the PM inspected treatment rooms and discussed with patients hospitalized the conditions of treatment. “I express respect and appreciation for the medical staff who takes care of our citizens, and first of all, of war invalids and veterans. The results we have seen within this visit make me sure that we are on a right path, and the continuous communication and openness for dialogue will allow us overcoming the present difficulties and improve the quality of the services provided,” the prime minister said.

At the same time, the PM referred to the need to turn to good account at a maximum the potential of the Centre and consider possibility to endow the letter with high-tech equipment, in order to render services of high quality.

Also, Pavel Filip stressed that the social protection of veterans was in the focus of the government and was approached in depth, with the cabinet’s attitude towards citizens’ health being expressed in concrete deeds. Thus, in last April, the government launched an action plan titled, Memory. Honour. Respect, meant to improve the social protection provided to the war veterans, participants in the combat actions in Afghanistan and the veterans of the war for the defence of Moldova’s territorial integrity and independence.

For their part, the heads of the war veterans’ associations thanked the government for the support provided. They emphasized the opportuneness of the work of an adviser on problems of veterans at the Office of the prime minister, which would allow systemically approach difficulties emerged and quickly identifying the needed solutions. At the same time, the war veterans’ representatives demanded that the number of patients able to benefit from treatment be increased. In the context, the prime minister said that, while working out the state budget law for the next year, the government would take into account the veterans’ demands and would consider all possibilities to earmark additional financial resources to this end.

War veterans are provided complex free of charge treatment at CREPOR, the cost of which is covered with state budget financial sources. Over 100 veterans and persons with disabilities annually benefit from treatment at the Centre.
AFLĂ imediat Știrile Publika.MD. Intră pe Telegram