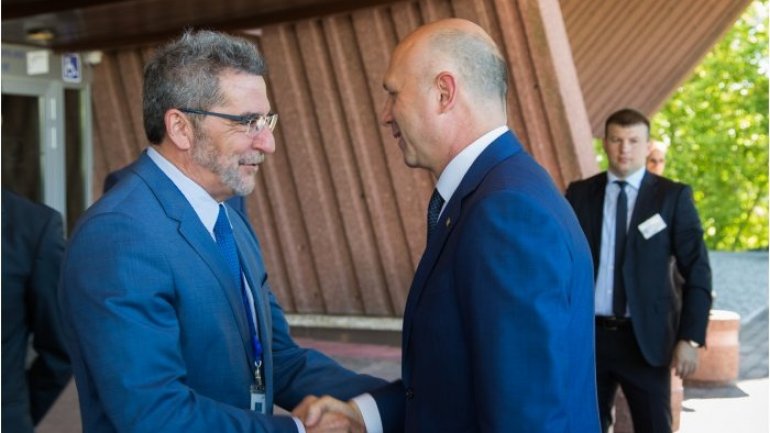 Prime Minister Pavel Filip, on an official visit to Strasbourg, has had a meeting with Vice President of the Parliamentary Assembly of Council of Europe (PACE) Antonio Gutierrez.

The two officials exchanged opinions on topical issues in terms of Moldova’s cooperation with PACE, including prospects for ending the procedure of the country’s monitoring by PACE.

Prime Minister Pavel Filip described the cooperation with PACE as an index in the advancement of domestic reforms, for which reason Moldova relies on the development of this collaboration in continuation.

For his part, Vice President of the Parliamentary Assembly of the Council of Europe Antonio Gutierrez encouraged Moldova’s authorities to press ahead with the justice reform, fighting corruption and strengthening the rule of law state.

The officials also discussed the reform of the electoral system. Prime Minister Pavel Filip noted that most recommendations by the Venice Commission would be taken into account, in order to ensure the observance of the democratic norms and prevent any types of abuses.

Touching upon the Transnistrian conflict settlement process, the sides tackled activities of the ad-hoc sub-commission in terms of conflicts between Council of Europe member states. The zones falling under the action of this sub-commission are: Transnistrian region, South Ossetia, North Cyprus, Crimea, and during eventual developments, Eastern Ukraine.

The officials agreed to continue the bilateral discussions, to develop and consolidate the constructive partnership between Moldova and PACE.
AFLĂ imediat Știrile Publika.MD. Intră pe Telegram