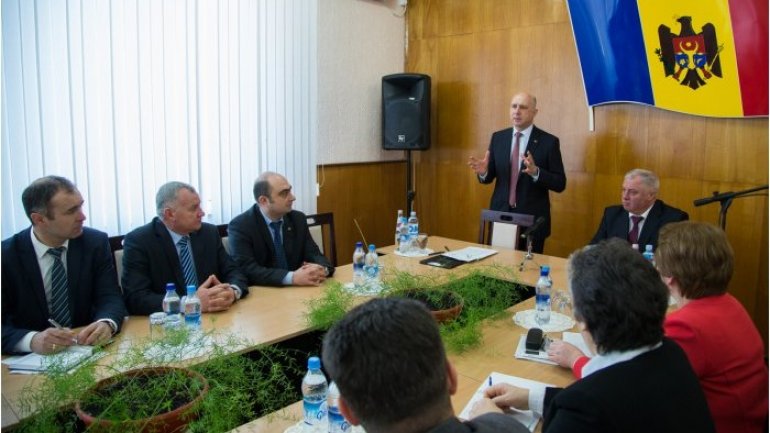 Prime Minister Pavel Filip today, January 26th, had a meeting with representatives of the local public authorities from Riscani district. He presented the main achievements of the cabinet during one year of swearing in and set the government goals for next period, the government’s communication and protocol department has reported.

“It was not a easy year, but I am glad that 2017 starts in other conditions. The situation determined us to mobilize in order to overcome the crisis and take urgent measures to stabilize the situation in Moldova. Now I am confident that during the year, the same forces and efforts will be streamlined to build, develop and implement projects, as the potential we have is greater,” he said.

The government’s activity in 2016 was streamlined to three priority trends: taking social measures, improving business environment and regaining the foreign partners’ trust in the Moldovan authorities. The measures taken by the cabinet in this regard have already started to give results, the minimum wage per economy increased up to 2,100 lei, pensions were indexed by 10 per cent, and the state budget got up by 2.6 billion lei compared to the previous year. “Our efforts will go on in order to ensure we have a solid budget meant to help us do other investments, including in social sector”, he also said.

At the same time, the premier also referred to the pension reform. He noted that it had been a necessary measure, as the system did not reflect the real situation in Moldova, and over 80 per cent of the retirees had incomes below the subsistence minimum. He said that the amendments entered into force on 1 January 2017 will allow increasing pensions in time, which will enhance the incomes of beneficiaries. “The reform will continue till we have pension level directly proportionally with the salary and social contributions”, he concluded.

Also, the premier referred to the progress recorded in the dialogue with the development partners, noting that they regained confidence in the Moldovan authorities, and foreign funding has been already released.

Other issues discussed at the meeting were related to measures taken to combat the underground economy and wages paid in envelopes, health reform and providing citizens with quality medicines at affordable prices and progress in ensuring citizens’ right to impartial justice.

At the end of the meeting, the mayors addressed several questions, including public employees pay system, public administration reform and providing schools and kindergartens with quality food. In the context, the premier said that the problems were targeted by the authorities and a string of measures had been already initiated to overcome existing shortcomings.

Also, Filip visited the Hydropower plant and Hydrotechnical Node Costesti-Stinca to collect facts about its activity. He talked to entity managers about the problems and possibilities to draw investments to modernize its infrastructure.
AFLĂ imediat Știrile Publika.MD. Intră pe Telegram