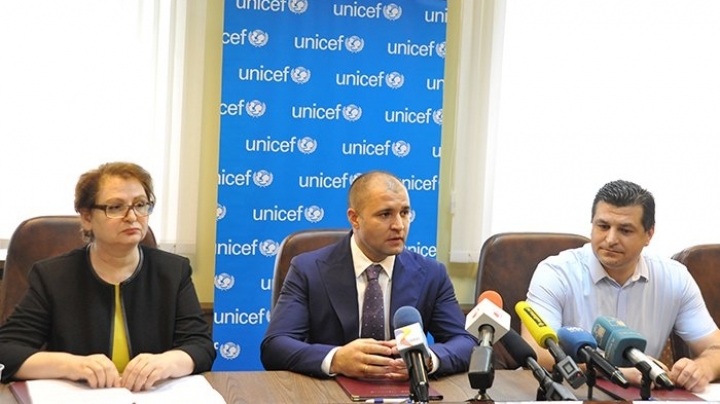 The Ministry of Justice will receive 3.3 million lei from the United Nations Children’s Fund (UNICEF), to develop one-off programmes in the juvenile justice sector. A memorandum between the two institutions was signed to this end today.

The accord provides for implementation of an inter-sectoral mechanism of cooperation in five Moldovan districts, for interventions in cases of children under the age of criminal liability and minors who infringed the law. Specialists who are to develop programmes, guides and trainings for minors are to be sent to these district centres.

At the event, Ministry of Justice Vladimir Cebotari said that, due to this memorandum, it would be much easier to develop new methods of social inclusion of persons who committed offences, including minors.

“Children can be easily influenced and become victims of persons involved in illegal actions. These young people should be identified before committing certain offences and benefit from psychological counseling. The probation institution should deal with this, first of all; yet, such a strategy is lacking in Moldova, which would develop one-off and clear-cut standards of preventing and counteracting offences among minors,” Cebotari said.

For his part, UNICEF Representative in Moldova Nune Mangasaryan said that, starting from 2006 so far, the justice system of Moldova had been subjected to more reforms in terms of children’s protection, and the results were good.

“Ten years ago, there were over 1,300 children who experienced trials. In 2015, their number dropped, reaching 290, and about 50 minors were sentenced for imprisonment for diverse offences in the first half of this year. A decrease is recorded, due to the fact that the justice field goes though a reform and children are no longer regarded by authorities as offenders, but as a group of vulnerable people in risk situations, who need support,” Mangasaryan noted.

The agreement on developing one-off programmes in the juvenile justice field will be implemented during 18 months, writes Moldpres.md .