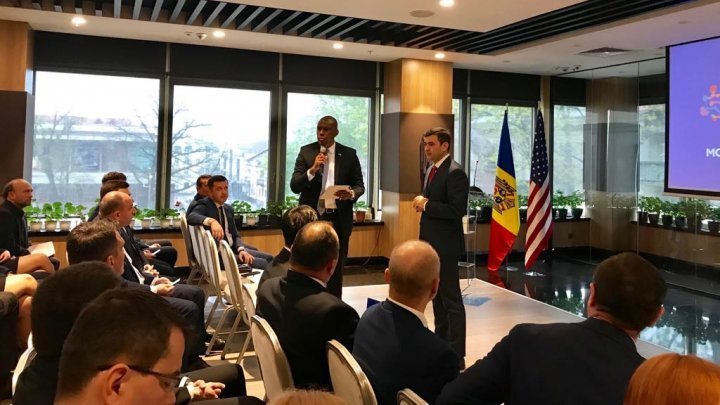 Various major fields are discussed in the Moldova - USA Forum organized in Chisinau during April 11-12. Information technologies (IT), agriculture, food industry and infrastructure are ones of them.

The event was attended by a U.S. delegation of 16 companies' representatives and Moldovan entrepreneurs.

IT seems to be the most attractive area for foreign investor. They intend to open Moldovan IT park which already gathered over hundred foreign investors among 400 residents within a year.

SAS Institute is an American multinational developer of analytics software based in Cary, North Carolina.

"At present, the Republic of Moldova is the market not only for IT sector but also all sectors. Both private companies and state institutions tend to approach digitalization. I was surprised to observe that the government's initiatives took a faster step to digitalize services for citizens than in Romania", said Andrei Niculescu, representative of SAS Software.

Agribusiness is also another interest of the U.S. companies. Alexandrion Grup, the Romania's largest producer of alcoholic beverages, is considering to expand on the Moldovan market.

"Moldova is a good place for potential investments. This country is well-known wine producer and has good cognac brand", said Stelios Savva, representative of Alexandrion Grup.

The U.S. Ambassador to Moldova Dereck J. Hogan was also open to support U.S. citizens who want to invest in Moldova. There are 398 enterprises with U.S. capital active on Moldovan market, with investments worth almost 517 million lei.

The United States is ranked eight in the top of the largest foreign investors. Among the most notorious American companies are Coca-Cola, Avon and Trans Oil. As for trade exchanges, the US delivered nearly $ 56 million to Moldova in the first 7 months of 2018, while Moldovan exports abroad cost only $ 13 million.