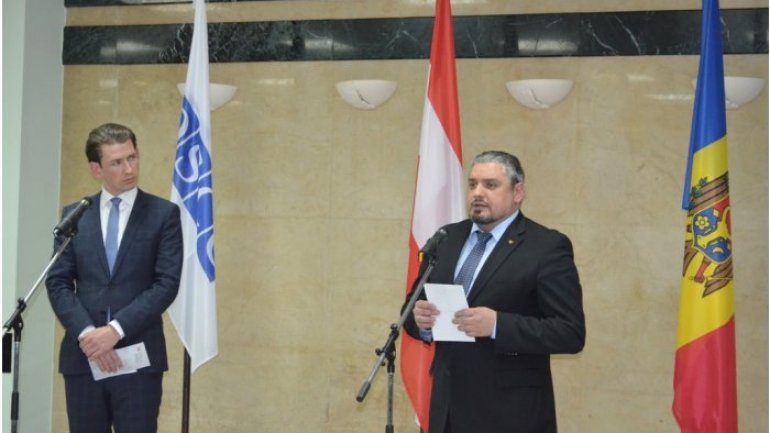 Following the discussions held by the two officials, the Foreign and European Integration Ministry’s information and media communication service issued a press statement, made by Andrei Galbur.

The press statement reads as follows:

I would like to thank also by this means my Austrian colleague, Minister Sebastian Kurz, for the visit paid to Moldova as OSCE chairman-in-office.

I believe that this visit, made just in the beginning of this year, is a positive signal which speaks for itself about the special importance the Austrian OSCE chairmanship attaches to the Transnistrian file. I voice hope that, during its mandate, the process of negotiations on the Transnistrian conflict settlement will be substantive and fruitful.

At the today meeting, we made a substantial exchange of opinions on up-to-date issues on the agenda of the Transnistrian conflict settlement process, as well as on aspects of the bilateral Moldovan-Austrian relations.

I welcomed the willingness of the Austrian foreign ministry, in his capacity of chairman-in-office, to contribute to booting the five-plus-two talks, in order to ensure a positive dynamic of this process, including by further promotion of confidence building measures and settling pressing problems faced by the residents from the two banks of Dniester.

We spoke out for extending the list of issues on the agenda of the negotiations formulated in the last year Berlin Protocol by approaching matters which concern us in continuation, such as:

- ensuring free movement of people, goods and services between the two banks of Dniester;

- opening of the bridge nearby the settlements Gura Bicului and Bicioc;

- ensuring needed conditions for a good work of the Latin-script schools from the Transnistrian region;

- ensuring free access of farmers from the Dubasari district to their farmlands placed beyond the Tiraspol-Ribnita highway; ensuring the observance of the human rights in the Transnistrian region, etc.

I and the OSCE chairman-in-office agreed on the opportunity of holding a new five-plus-two meeting in Vienna in the second quarter of this year, in order to continue discussions on issues on the agenda of the negotiating process.

At the same time, we reiterated mutual interest in the extension and deepening of the Moldovan-Austrian cooperation in sectors of common interest, including the promotion of the bilateral political dialogue, fostering the commercial and economic exchanges, increasing the Austrian investments in the Moldovan economy, carrying out projects of assistance for development, etc.