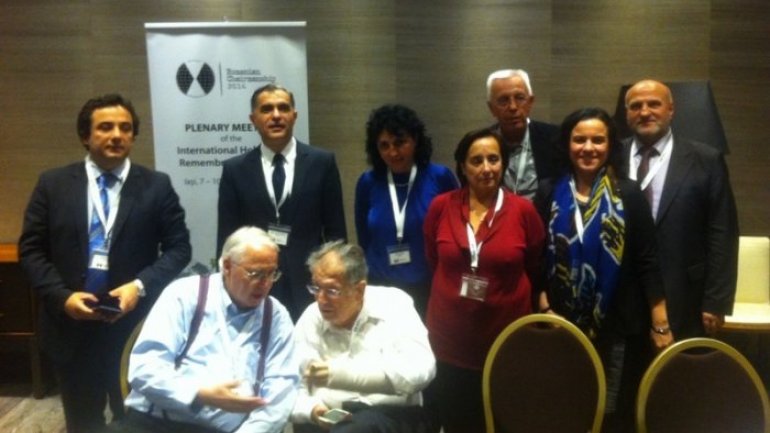 The second plenary meeting of the International Holocaust Remembrance Alliance (IHRA) from 2016 took place in Iasi, Romania, on 7-10 November. A delegation of Moldova, which also included representatives of the communities of Jews and Romanies, participated in the event, Moldpres has reported.

In a speech given at the meeting, the head of the Moldovan delegation, ambassador-at-large at MAEIE, Ion Stavila, informed about the activities carried out on the last period to propagate the Holocaust remembrance in Moldova, in the context of implementing the IHRA agenda. Stavila pointed out, in particular, a conference dedicated to the best practices concerning the Holocaust remembrance and a seminar of training history teachers involved in teaching subjects related to the Holocaust in schools, organized in Chisinau on 7 October, and respectively, 31 October – 3 November. Ion Stavila stressed the special importance of the adoption by the Moldovan parliament of the political Declaration on acceptance of the report of the International Commission for the Study of Holocaust, led by the departed Elie Wiesel.

The head of the Moldovan delegation thanked all the IHRA member states, in particular, Romania, as well as the OSCE Mission in Moldova, for the support provided to organize the aforementioned activities, in the context of carrying out the IHRA agenda on cultivation of the Holocaust remembrance, in order to avoid the repeating of such tragedies against the mankind in the long run.

For its part, the IHRA leadership welcomed the activities carried out in Moldova, in order to achieve the goals of IHRA and reiterated willingness to further provide support to this end.

The International Holocaust Remembrance Alliance is an inter-governmental organization, set up in 2000, the foundation act of which is the Stockholm Declaration. The goal of this organization is to promote activities of research, education and cultivation, both nationally and internationally, of the memory of the victims of the genocide against the Jews during the World War II. Presently, IHRA has 31 member states and 11 states with status of observer. Moldova joined IHRA with status of observer in December 2014.