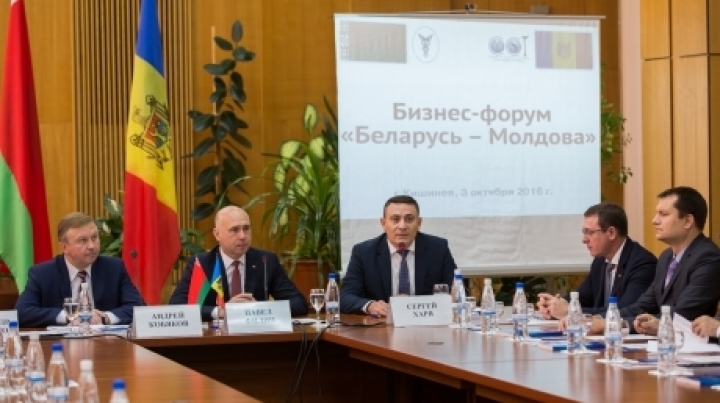 Filip approached the importance of developing bilateral relations, including by supporting the business initiatives and direct investments in the national economy. At the same time, he said the Moldovan-Belarusian relations registered positive dynamics, and the commerce exceeded 250 million dollars in 2015. “Moldova is interested in initiating new common projects and continuing the already existing ones,” he said.

At the same time, Filip referred to the 17th meeting of the joint intergovernmental commission for economic cooperation, held in Chisinau today. He noted that it was an important platform for developing partnership between the two countries and for dynamising mutually advantageous cooperation. “Moldovan government is further willing to support in launching projects on industry development in our country. We encourage business people from Belarus to invest in our country and to open business within the Free Economic Zones and parks, as well as to attend contests of privatization”, he said.

For his part, Kobeacov said the Moldovan-Belarusian business forum was a proof that the bilateral relations in the economic sector switched to a new quality level. At the same time, he pointed out that the Moldovan-Belarusian partnership was based on mutual interest, and the trade balance between the two countries increased by 10 per cent in the first seven months of 2016, reaching 150 million dollars. Over 60 agreements on cooperation in different sectors are signed between the two states.

“Belarus is permanently among first ten trade partners of Moldova and annually uses about 25 per cent of Moldovan export of wine and 10 per cent of export of fruits and vegetables. At the same time, the Belarusian production is found on the Moldovan market. Assembly of Belarusian trolleybuses was launched in 2016, as well as bottling of wines Cricova in Minsk. We hope this collaboration will be continued,” Kobeacov said.

In the context, the premiers urged the business circles to find new opportunities to develop economic relations and to make optimal use of the current potential.