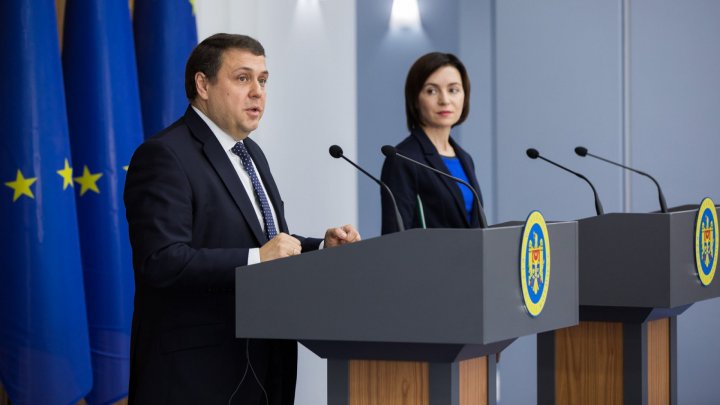 End-of-Mission press releases include statements of IMF staff teams that convey preliminary findings after a visit to a country. The views expressed in this statement are those of the IMF staff and do not necessarily represent the views of the IMF’s Executive Board. Based on the preliminary findings of this mission, staff will prepare a report that, subject to management approval, will be presented to the IMF's Executive Board for discussion and decision.

An International Monetary Fund (IMF) staff team led by Ruben Atoyan visited Chisinau during June 26 to July 10, 2019 and held discussions with the Moldovan authorities on the fourth and fifth reviews under the IMF-supported economic program. At the conclusion of the visit, Mr. Atoyan made the following statement today in Chisinau:

“IMF staff and the Moldovan authorities have reached a staff-level agreement on the combined fourth and fifth reviews under an economic reform program supported by the three-year Extended Credit Facility and Extended Fund Facility (ECF/EFF) arrangements. The agreement is subject to an approval by the IMF management and the IMF Executive Board. Consideration by the Executive Board could take place in September 2019, subject to implementation by the authorities of agreed prior actions on ensuring the sustainability of public finances, improving tax compliance, and advancing the banking sector rehabilitation. Completion of the review will make available SDR 33.6 million (about US$46.5 million).

GDP growth was 4 percent in 2018, supported by robust domestic demand, and is expected to remain solid in 2019, at about 3.5 percent. Inflation dropped sharply in 2018, largely due to lower regulated prices and strong nominal exchange rate appreciation. But pressures are building up, with inflation expected to peak at about 7.5 percent at the end of the year.

The mission reached an understanding on fiscal measures needed to correct policy slippages from the 2018 package of tax initiatives and capital and tax amnesty that undermined program objectives and led to rising budgetary pressures. The authorities plan to approve a sound 2019 supplementary budget to mitigate fiscal vulnerabilities, while protecting priority social spending.

The authorities made good progress in advancing the rehabilitation of the banking system. This has culminated in visible improvements in banks’ health, with credit to the economy recovering and non-performing loans declining. In the period ahead, it was agreed that priority would be given to the completion of the banking sector reforms, reinvigorating efforts to recover assets from the 2014 banking fraud, and addressing vulnerabilities in the non-bank financial sector.

Monetary policy should remain focused on price stability. The National Bank has appropriately increased its policy rate in June in response to building inflationary pressures. It should stand ready to take further actions to steer inflation towards the 5 percent target. The NBM’s strategy to allow greater exchange rate flexibility—with interventions limited to smoothing excessive volatility—will strengthen credibility of its inflation targeting regime.

The new government is committed to advance macro-economic reforms to bring the IMF-supported program to a successful completion.”