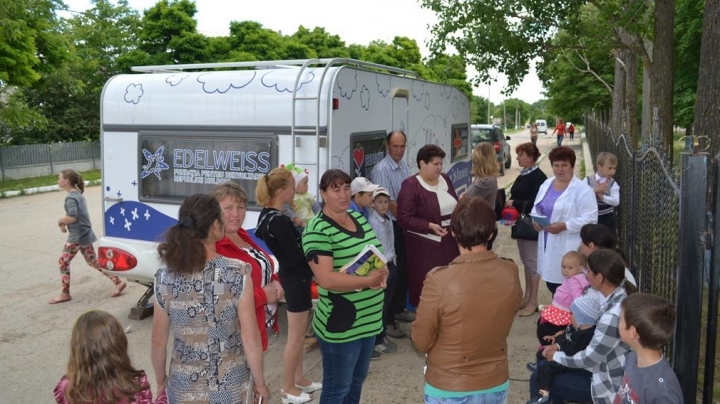 Tens of children from Clocusna village, Ocnita district, were examined by pediatricians in the framework of the campaign “Moldova Rebirth”, initiated by Vlad Plahotniuc’s “Edelweiss” foundation.

In this locality, the specialists gave advice to patients in the mobile medical office, endowed with modern equipment.

The mothers from Clocusna say that they are bringing their children very seldom to the family doctor, because he comes only twice a week in the village. And in emergency cases, they are going to the Ocnita hospital.

“There is no possibility in the village for specialists to consult children. Here the village doctors know things, but I think that the children have to go to specialists. Especially those who have serious health problems.”

“We are very happy that they also came here in Clocusna. Here is a bit difficult because we do not have specialists.”

“There were some complaints from the child and I thought that it is because of the kidneys and I decided to come to the examination. We are also going to Ocnita and in the village when it is the case, but I think that is much better that they came today here.”

The doctors claim that most of the times children get ill because of incorrect alimentation and of products which contain a lot of pesticides.

“The children we examined are suffering mostly of chronic amygdalitis, anemia, because of iron deficit, and roundworms. We also met children with cardiovascular problems” said the pediatrician Olga Tihai.

“The pain is a signal that there is a pathology, but where it is localized we are starting according to the algorithm: ultrasound, biochemical analysis, endoscopic intervention if it is necessary, until the diagnosis is established and then is taken the decision for a surgery treatment or conservative treatment” mentioned the doctor Ion Ghetavu.

For a period of nine months, the children in the country are benefiting from free medical assistance. Until now there have been examined over 4,000 children from over 50 localities.