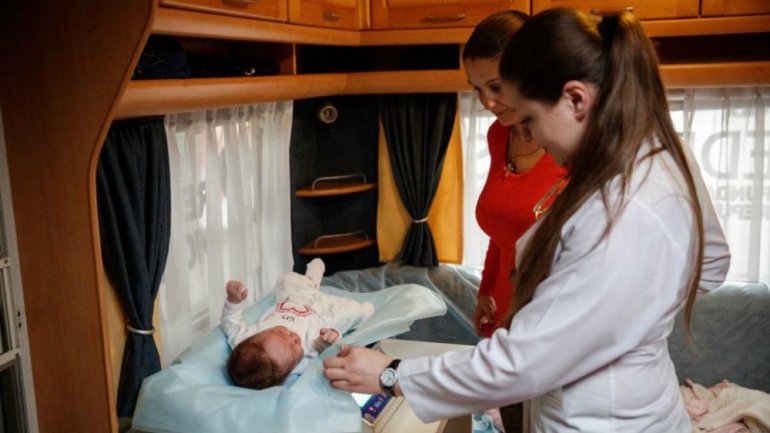 Mobile pediatric cabinet "Moldova Rebirth", started by Vlad Plahotniuc's Edelweiss Foundation, helped thousands of children from the entire country. Many of them have been diagnosed with serious diseases. They were urgently transported to the district hospitals. There the children received necessary medical help, for which the parents did not have to pay anything.

Gojan Gheorghe is 15 years old is lives in Radeni village, Calarasi district. The boy was diagnosed with a serious form of boils on his body.

"Before the pediatric office came, I was feeling very ill. It was difficult to go to school. After they came, they prescribed me to stay at home for 17 days, after which I will get better and go to school" said the resident of Radeni village, Calarasi district, Gheorghe Gojan.

Gheorghe is in the care of his aunt. The woman says that such actions are welcomed in the villages.

"There are many children who don't have money, and you cannot go to Chisinau with a kid, you don't have anything. You don't have any directions, you don't know where to go. But first they came with everything. And it was very good. If only they could come at least twice a year to our village" said the resident of Radeni village, Calarasi district, Maria Gojan.

Adriana Jardan from the same village suffered from disseminated furunculosis. After being hospitalized, the girl says that she is perfectly healthy. Her mother tried to home-treat the girl, but her health got worse and she went to the mobile pediatric office.

"She had some bumps on her legs. At first we thought it was from a mosquito. Afterwards it got worse. She couldn't even walk. After this everything got to normal, we did not have problems, the girl felt okay, said everything passed" declared the resident of Radeni village, Olga Jardan.

"I was dressing with difficulty, I was in school, it was difficult. I went to the cabinet of this company Edelweiss, they called the ambulance. From there I went tot the hospital and from there they gave me a cure and now I feel good" said the resident of Radeni village, Adriana Jardan.

A four-year-old kid from Bahu village, Calarasi district, was diagnosed with a kind of hernia by hte doctors from the pediatric office. The parents were suspecting that the boy is suffering from anemia and was treated in domestic conditions. He was transported to the hospital where he had two surgeries, and in order to be perfectly healthy, the boy has to have a third surgery.

"He doesn't have any pains, doesn't have anything. We thank God, thank Edelweiss. This is a great joy and a big help for us as parents and for the children. We didn't pay anything, everything was free of charge. From Edelweiss part" said the mother Tatiana Salarur.

The mobile pediatric office got into over 100 villages where are no family doctors.