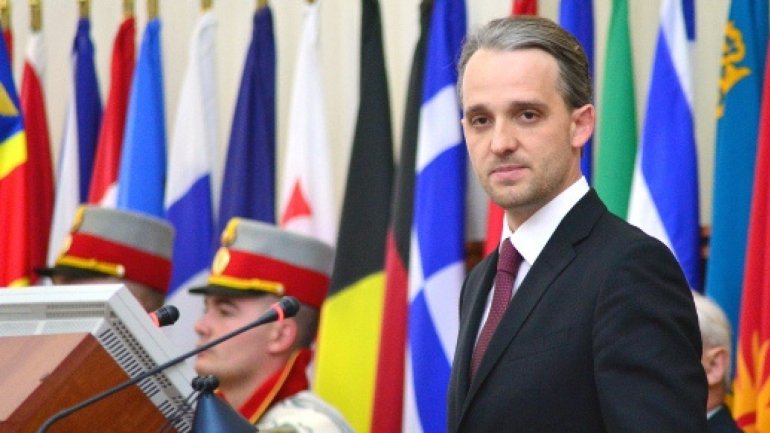 The Parliament President signed today the decree for the appointment of Eugen Struza as the Minister of Defense.

During the ceremony, Eugen Sturza swore an oath.

"I solemnly swear to devote all my personal strength and abilities to the advancement and prosperity of the Republic of Moldova, to always abide by the Constitution and the laws of the country, to defend democracy, the fundamental rights and freedoms of man, and the sovereignty, independence, unity and territorial integrity of Moldova."

"I wish you have a successful mandate. The Republic of Moldova needs a functional government and defense ministry. The appointment today of the Defense Minister was achieved through a special procedure, an exceptional legal solution due to the refusal made by Moldovan President. I hope this appointment will put an end to the constitutional crisis and no more another exceptional situation.  The Government of the Republic of Moldova always has parliamentary support", said Andrian Candu, Parliament Speaker.

"I want to congratulate Mr. Eugen Struza, welcome you to the government team, today we ended the uncertainty of the Republic of Moldova. Eugen Sturza's mandate is quite complex. We're going to have a NATO liaison office in December. Yes, Moldova is a neutral country, we have to obtain a professional army. Above of all, I wish you much success, "said Premier Pavel Filip

"I want to send my gratitude for the trust you've given me. It's the first method for the Republic of Moldova to solve this crisis. Once I take over my mandate, I want Moldova to turn from a security consumer to a supplier. I will count on improving the international cooperation that has been affected in the past. It is very important that the National Army is not involved in political games. I know the challenges of this mandate, "said new Defense Minister Eugen Sturza.

Later on, Eugen Sturza went to the Ministry of Defense, where he received his banner of Defense Minister.

Head of State Igor Dodon wrote on his Facebook page that Eugen Sturza is taking the office illegally, while the Government is committing a grave mistake. The president also wrote that he wishes for a snap election in order to increase the numbers of Socialists in the Parliament and make the state a Presidential one.

The position for Defense Minister was vacant for the past 10 months, when in December 2016, Anatol Șalaru was removed from office by Igor Dodon, for supposedly dealing with NATO, despite Moldova being a neutral state.

At the same time, according to Igor Dodon, Şalaru allowed the installment of American military equipment in the Great National Assembly Square for Victory Day and openly supported unification of Moldova and Romania. Eugen Sturza is 32-year-old and vice president of European People's Party of Moldova since 2015. His political career begun in 2009, when he became former Prime Minister Vlad Filat's adviser. He maintain the position until he became Chief of the Cabinet of Ministers of Prime Minister Leancă in 2013. Eugen Sturza has a degree in Finance, having graduated Academy of Economic Studies of Moldova.

PUBLIKA reminds that Eugen Sturza's candidacy was forwarded on September 12, by the Prime Minister and rejected by the President. He was later forwarded again, but was rejected a second time.