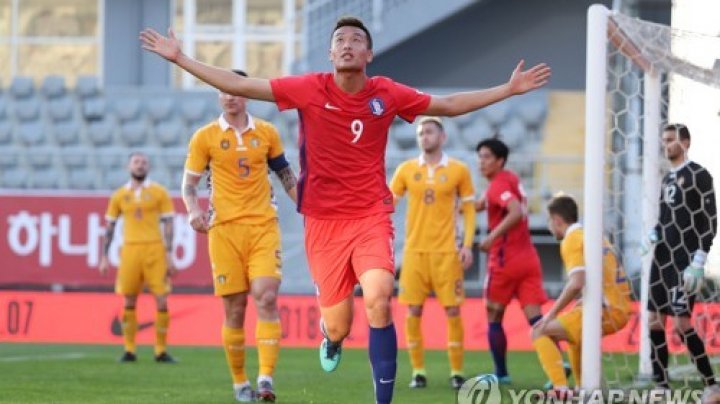 The South Korean men's national football team opened the new year with a victory over Moldova on Saturday.

South Korea, 59th in the latest FIFA rankings, collected a 1-0 win against world No. 166 Moldova in a friendly match at Mardan Stadium in Antalya, Turkey, thanks to Kim Shin-wook's second half goal.

The game was South Korea's first of three friendlies scheduled in Antalya, Turkey, where their pre-World Cup training camp is located. The Taeguk Warriors, led by head coach Shin Tae-yong, will next face Jamaica on Tuesday and take on Latvia on Feb. 3.

South Korea have been in Turkey since Tuesday with 24 players, who are mostly from domestic K League clubs, to fine-tune their preparations for the 2018 FIFA World Cup. South Korea are with Germany, Mexico and Sweden in Group F at the World Cup in Russia.

Against Moldova, South Korea used an experimental lineup that featured unfamiliar faces, with some making their international debut.

Both teams had a quiet first half. South Korea only fired two shots -- neither on target -- while Moldova made only one attempt.

South Korea's best scoring chance in the first half came in the 30th minute, when Jin Sung-wook headed down Kim Tae-hwan's cross for Go Yo-han in the box. However, Go's close-range effort went inches wide of the net.

South Korea replaced three players to start the second half, while Moldova changed two. For this friendly, the two teams agreed to allow up to six substitutions.

Lee Chang-min had a chance to double the lead for South Korea in the 81st, but his right-footed attempt went wide, while Lee Jae-sung's strike one minute later was saved by Calancea.