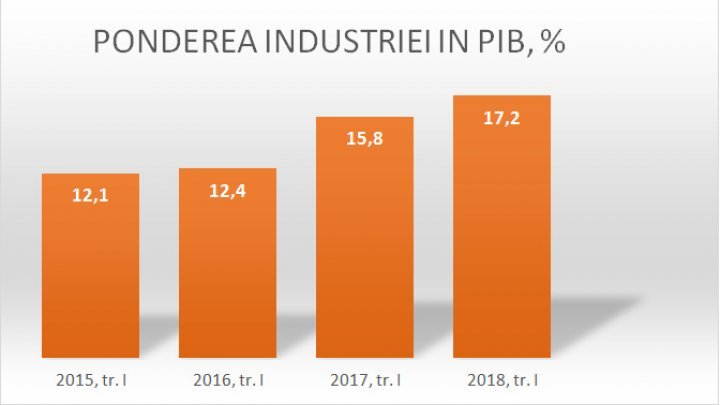 The Moldovan industry accounts for 17% of the Gross Domestic Product, with a significant increase over the last three years when it was 12%, according to the National Bureau of Statistics.

Economic experts argue that the Government has managed to lay the foundations for a change / modernization of the structure of the Moldovan economy, and this promising pace can generate important changes in the economy and society.

PUBLIKA.MD reminds that Gross Domestic Product registered an increase of almost four percent in the first quarter of this year. The rhythm is higher than in the same period last year, according to data from the National Bureau of Statistics.

Thus, in January-March, the value of goods and services produced by the country's economy amounted to more than 37.6 billion lei. The greatest contribution to economic growth was the trade, but also the accommodation and public catering activities. Their weight was 20.4 percent for the Gross Domestic Product.

Industry contributed 17 percent, and its share rose almost a percent from the same period last year. Also, the IT field contributed 6.5% to the country's economy, the growth rate being 0.6 percent higher than in January-March 2017.