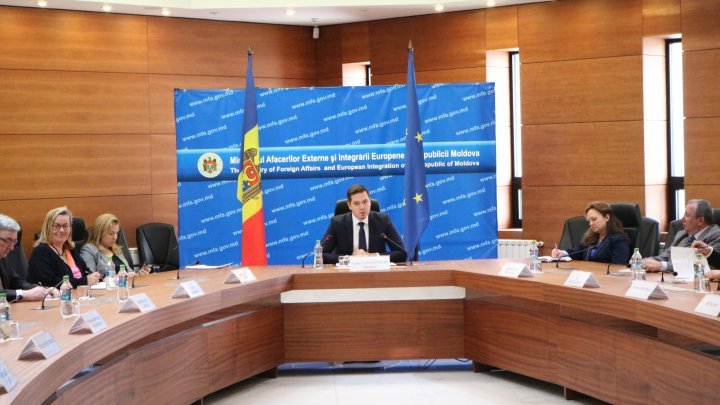 The results of the Moldova-EU Association Council and the foreign cooperation priorities were presented by the Minister of Foreign Affairs and European Integration, Tudor Ulianovschi, during the meeting with the ambassadors of the EU member states and other development partners accredited in Chisinau.

The head of the Moldovan diplomacy made a comprehensive presentation of the Government's concerns about the European integration process in the light of the commitments made under the Association Agreement, paying special attention to the reform of the judiciary, the fight against corruption, the central and local public administration reform, etc.

Referring to the bilateral dialogue with the EU, Minister Ulianovschi said that "according to our priorities in the Eastern Partnership, the Republic of Moldova has presented a reflection document aimed at strengthening our bilateral cooperation with the European Union and the EaP partnership platform. These proposals will be examined by the EU and taken into account in strengthening our future cooperation. " The head of Moldovan diplomacy stressed that the Republic of Moldova is determined to continue its European path and that, on this path, the supports of the European countries matter really much.

The Minister of Foreign Affairs informed the heads of missions about our country's priorities in the bilateral and regional cooperation process, with each state as well as within different international organizations. In this context, Tudor Ulianovschi informed the diplomats about the meeting of the heads of government of the GUAM member states, which will be held in Chisinau on 21 June, under the presidency of the Republic of Moldova in this organization.

"The event will be organized alongside a business forum, which essentially corresponds to the priorities announced by Moldova for our presidency - the development and growth of trade opportunities and communication connections between our countries", emphasized the head of Moldovan diplomacy.