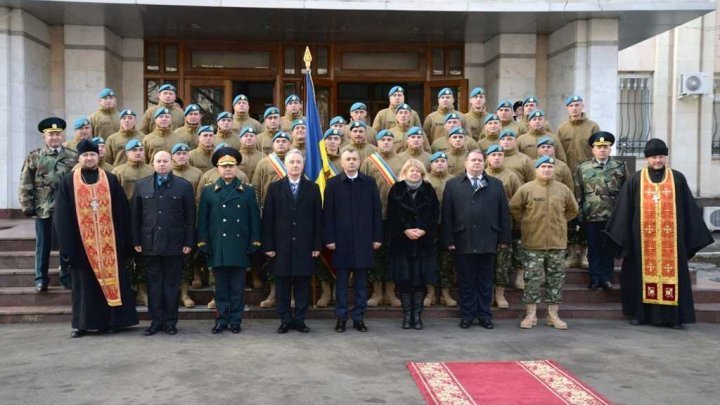 Operation KFOR, carried out in accordance with UN Security Council Resolution 1244, represents our pride, we respect them and admire their courage, said PM Ion Chicu in the ceremony on the detaching of the 12th National Army’s contingent on an international peacekeeping mission to Kosovo.

For her part, Italy's ambassador to Moldova, Valeria Biagiotti, said that Italy expresses its high appreciation for the readiness of Moldova to participate in the operation along with the Italian contingent, which continues to play an important role in guaranteeing regional sovereignty and security in Europe.

"We greatly appreciate the professionalism and competence of the Moldovan military, as well as their ability to integrate and interact with the Italian military," said the ambassador.

Defense Minister Victor Gaiciuc thanked the Government of Italy and the United States of America, who supported the contingents of the National Army in the training, detachment and logistics assurance department in the Kosovo operations.

The Minister of Defense asked the military to carry out their mission honorably, as did the officers and non-commissioned officers from the other 11 contingents of the National Army.

Those 40 servicemen during six months will work at the Camp Vilaggio Italia multinational base, placed in the Pech settlement, Kosovo. The decision on detaching National Army military to the KFOR mission was approved by Moldova’s parliament on 1 November 2013 and the first contingent was sent on 8 March 2014.