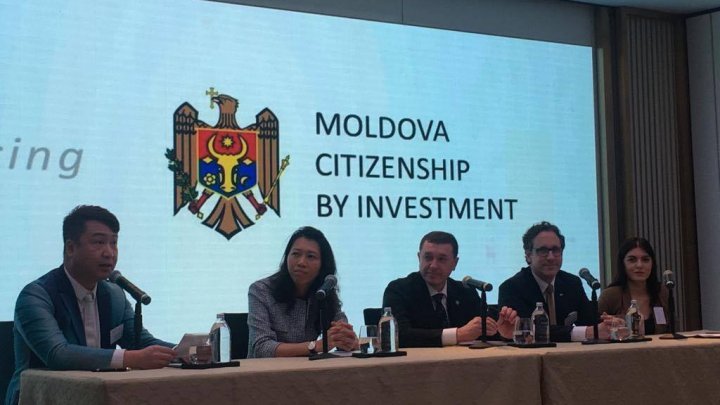 The Republic of Moldova is promoting the citizenship by investment program during March 22-27 in China.

The mission is led by the State Secretary of the Ministry of Economy, Vitalie Iurcu and the Deputy Director of the Public Services Agency, Director of the Citizenship Acquisition Program, Iulia Petuhov.

The visit aims to promote the image of the country, the economic opportunities offered by the Republic of Moldova to potential Chinese investors, and the promotion of the Citizenship Acquisition Program through investment.

The agenda of the visit started on March 22 in Hong Kong with presentation of 50 leading media organizations of Hong Kong and Moldovan media ones. Two private interviews were offered to Jirmian company (the Chinese equivalent of Bloomberg) and Asian Private Banker (specializing in asset management in the Asian community).

On the same day, Shenzhen city, the city with the third-highest GDP in mainland China in 2017, hosted the Moldovan event to promote Citizenship Acquisition Program. The event was attended by about 100 people business people in the city who are potential applicants for the Program.

On March 23, the campaign continued with other events in Beijing. They were organized by two Immigration Agents with a high reputation investment in the People's Republic of China - Worldway and Noah Immigration. Each of them had about 200 sub-agents interested in offering the Chinese Citizens Program.

Meanwhile, on March 23, a meeting was held with another leading Global Immigration Agent - Global Visa (30 worldwide offices and about 1,000 employees). The event discussed the concept of the program and opportunities to increase its competitiveness , compared to other citizenship programs through international investment.

On 25 March, the promotion campaign continued in Shanghai (the most economically developed city), with 2 informative seminars organized by about 50 representatives of the Chinese potential investors and applicants of the Program . Seminars were hosted by Austar and Kosdromos, the latter being represented by its sub-agent, Wise Visa, being one of the industry's top agencies with about 16 years of experience in the industry.

The Agenda to promote the country and program will end with three other seminars in Shanghai and Qindao (in top 10 economic developed cities). Company Worldway will host the event with participants of around 100 potential entrepreneurs in The Republic of Moldova and applicants for the Program.

The participants of the events have shown interest in investing in the Republic of Moldova, as well as the Citizenship Acquisition Program through an investment, remarking it as a competitive and high potential.

Among the most advantageous elements of the Program were the value of the Moldovan passport, which offers a single free access on two large markets (European Union and Commonwealth of Independent States), processing time for files up to 90 days and opportunities for living and development of business in the Republic of Moldova after acquiring citizenship.