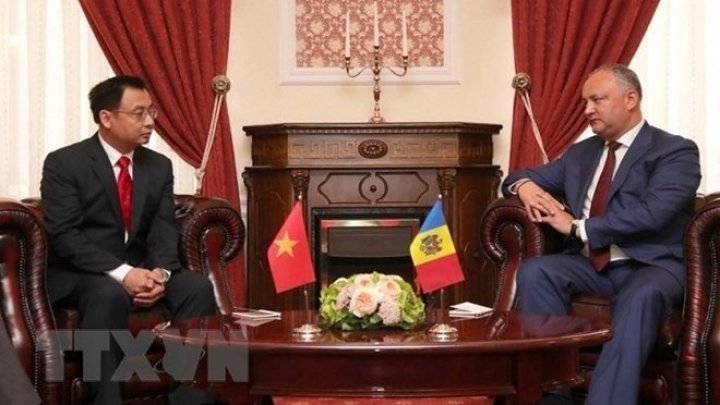 While presenting a letter of credentials to President of Moldova Igor Dodon in Chisinau capital city on May 18, Tuan congratulated Moldova on its achievements since economic reform in 2015.

The ambassador expressed his wish that the President and ministries and agencies of Moldova will assist Vietnamese nationals and students in the European country to serve as a bridge between the two nations.

The guest hoped that the President and Government of Moldova will create favourable conditions for him to fulfil assigned tasks.

Dodon, for his part, said Moldova always treasures ties with Vietnam – a promising partner in the Asia-Pacific region.

Highlighting the important role of bilateral economic, health care and education, he said Moldova has welcomed many Vietnamese students to Chisinau and hoped that both countries will further strengthen education collaboration in the near future.

The host committed all possible support to the ambassador to fulfill assigned tasks and contribute to bilateral ties.

Both sides vowed to fully tap potentials of cooperation in diplomacy, politics and economy, at international organisations, the United Nations and multilateral forums.

They expressed their interest in strengthening bilateral legal framework, stepping up political dialogue and consular consultation, agreed to facilitate the exchange of high-level visits to diversify joint work in fields of shared concern.

Earlier on May 17, Tuan met and presented a copy of credentials letter to Secretary of State for Bilateral and Multilateral Affairs Tatiana Molcean

The host hoped that the two countries will enter a new period in their ties as well as promote initiatives to reinforce bilateral and multilateral ties.

In the afternoon of the same day, the ambassador held a working session with Director of the Department of Asian-Pacific Affairs Emil Jacota to discuss measures to boost bilateral links across economy, trade, education and national defence.

On the occasion, he also met Vietnamese nationals and students in the country.