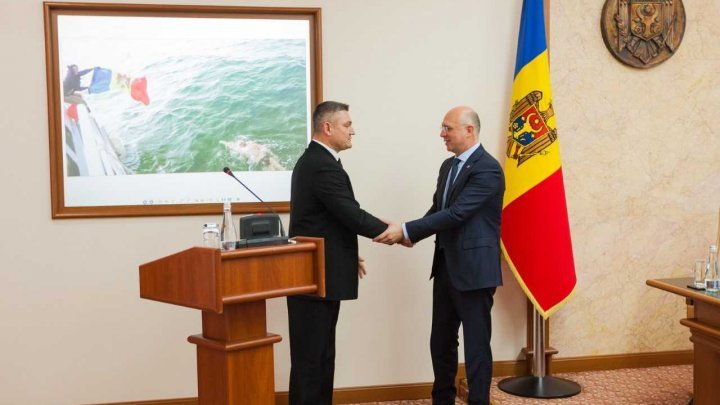 "I, personally, am proud of this man, even though he has moved to Ireland for over 20 years. He's always honored as a citizen of Republic of Moldova and wrapped in the flag of the country after his victory. This is a lesson of patriotism for us. Ion Lazarenco proved that courage and volition always exists and then to achieve the goal", said Pavel Filip.

Ion Lazarenco thanked the Prime Minister for his support and the decision to submit him to the Nobel Peace Prize.

"I believed in my dream, in my message and I thank the Prime Minister for this heroic decision to submit my candidacy. I believe in us as a country, if we unite our forces, we will make changes. Together we can become ambassadors of peace and goodness", said Ion Lazarenco.

The prime minister said that now is the time to prove that Moldovans can be united.

"I strongly believe that Republic of Moldova is like Ion Lazarenco - ambitious and resilient, so if we organize and mobilize to promote the athlete, we will have something we can boast about", concluded Pavel Filip.

Ion Lazarenco is the first person over the world who crossed the first seven straits.

Moreover, he swam along the Dniester River to attract community attention to the Transnistrian conflict.

His first project was the "Dniester Peace Swim" at a distance of 240 km, covered in 8 days for charity. Another project with a message of peace and friendship is the project "Dniester unites Moldova".

Nobel Laureates will be announced in December this year.