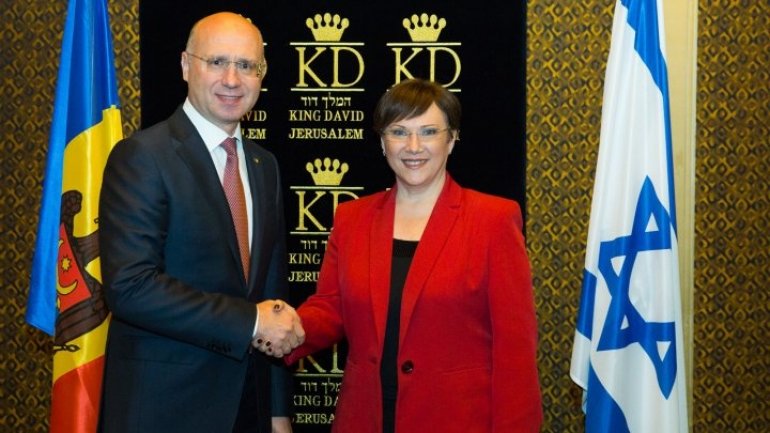 In the official visit in Israel, Moldovan Premier Pavel Filip had a meeting with Tali Ploskov, Vice-President of the Knesset and co-chair of the Moldovan-Israeli parliamentary friendship group.

Vice-President of the Israeli Knesset, in turn, showed willingness to promote investment possibilities in our country. Similarly, she visited Moldova in the beginning of this year and was impressed with the beauty of country:

"I'm convinced that we are able to implement further projects that can benefit our citizens in Moldova and Israel".

In this regard, Pavel Filip mentioned the importance of agreement approval of social project regarding Moldovan citizens living in Israel. Tali Ploskov pledged her support for this project as well.

Also, during the dialogue, Pavel Filip referred to the actions taken by the Republic of Moldova to condemn the Holocaust and combat anti-Semitism. The Premier said that in July 2016, the Parliament of Chisinau adopted the Declaration on the acceptance of the final report of the International Commission on Holocaust Studies, chaired by the late Elie Wiesel, and in January 2017 the Government approved an Action Plan on its implementation.

Tali Ploskov praised this decision by the authorities of the Republic of Moldova.

"It is a fair and important decision not only for the Jews, but for all. It is a duty in the history. "

The officials also exchanged views on Moldovan-Israeli cooperation on health, defense, home affairs and culture. Pavel Filip and Tali Ploskov welcomed, in the context, the organization of the Days of Culture of the Republic of Moldova in the State of Israel.

Tali Ploskov is native to the Republic of Moldova. She was born in Bălţi.