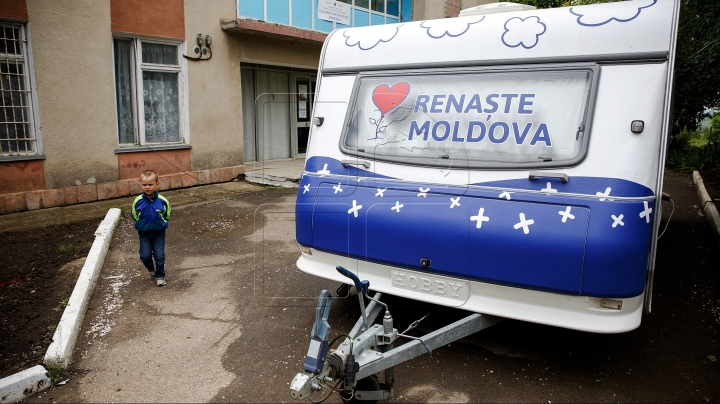 Tens of children from Napadova village, Floresti district, have been examined today by pediatricians in the framework of the campaign "Moldova’s Rebirth", initiated by Edelweiss Foundation. The kids were examined by a therapist, and also have passed the medical ultrasound.

The parents were very thankful that their children could have the examination. They say that in the village are a few professionals, so they have to go to the regional hospital.

The mobile office “Moldova’s Rebirth” has reached today the farthest point of Floresti district, Napadova village. All children from this village have been consulted today by a group of therapists.

Specialists say that they find various illnesses, and if necessary, the children are leaded to the hospital.

"The most frequent are respiratory and renal-urinary infections, also ORL, with amygdalitis, chronic pharyngitis.  There are cases when children need a series of more detailed investigations, and we are sending them to the regional hospital or hospital of 3rd level, like Mother and Child Center" said pediatrician Olesea Nalbus.

Also the children have done a medical ultrasound.

The parents were thankful that the children have received professional medical consultation. They say that often they have to go to the regional hospital to examine the children.

Campaign "Moldova’s Rebirth" has been initiated in April 2016 by Edelweiss Foundation, the founder of which is Vlad Plahotniuc. For a period of eight months, children from the whole country will receive free medical assistance.