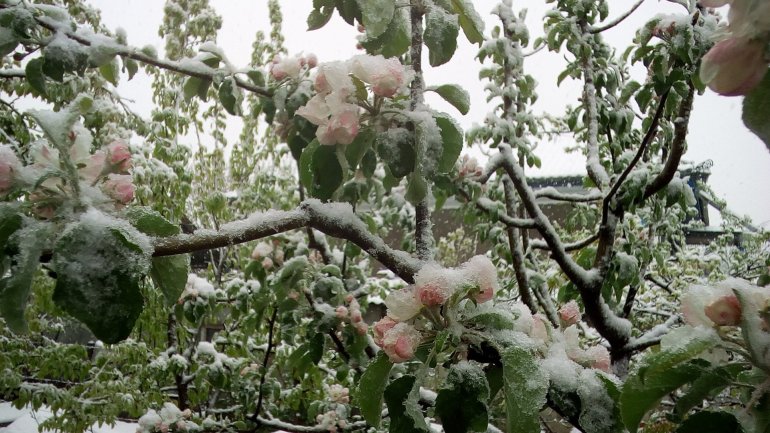 Experts from the Agricultural Ministry (MAIA) says the damage caused by bad weather is still insignificant, but they may increase due to meteorological variations, Moldpres reports.

The MAIA’s press service has informed that no temperatures lower 0...+1°C were not recorded in Moldova’s Centre and North areas, so the crops in that area would not be significantly affected.

Also, the South-Central region faces a more difficult situation. Here, in the bumps of agricultural lands were recorded temperatures up to -3°C (Cahul, UTA Gagauz-Yeri).

The snow precipitations were recorded in the Center and South. In the central area, several precipitations fell, forming a layer of snow of 0,6-0,8 m, in some places even one meter, while in the southern area the snow layer reached 50-60 cm. Under these conditions, young tree plantations may suffer, especially hazelnuts, which foliage surface is developed up to 40 per cent. The damage to sweet-cherry, cherry and apricot plantations may also occur. In some areas of the valleys, walnut plantations froze.

Similarly, because of heavy snow in a few localities, it was identified greenhouse damage.

Asked by the agency, the lab head of the Institute of Genetics, Physiology and Plant Protection of Sciences Academy (ASM), Leonid Volosciuc, said that trees were currently in development and low temperatures would not bring significant losses. "Most will suffer from stubble crops, I refer to sweet-cherry, cherry and plum, less will be grains, because they are more resistant. At the same time, we are going to see the impact of the outside time on the apple, pear and the quince," said Volosciuc.

The specialists also said that the damage would increase if temperatures in the next few days to be lower than -4...-5 degrees.
AFLĂ imediat Știrile Publika.MD. Intră pe Telegram