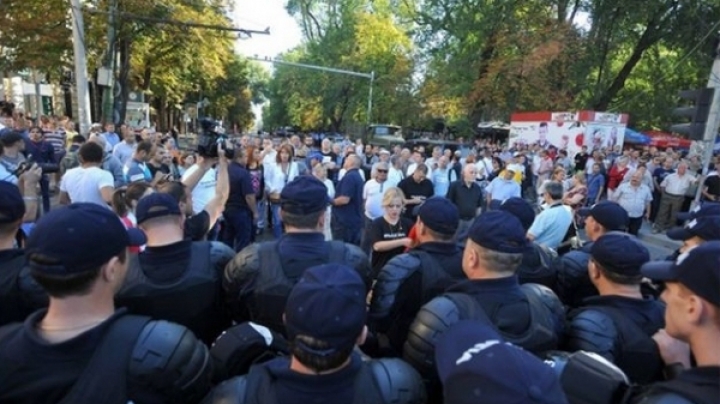 “Police did not use excess of force and did not use prohibited substances on 27 august”. This was the declaration of the Ministry of Internal Affairs of Moldova, Alexandru Jizdan.

The official mentioned that he will present of the necessary information.

“Were overtaken security measures, they had the intent to crash the parade, to break the cordon. When people started to throw objects into policemen, the police used the special means. I apologize to those who suffered from these actions. People tried to break the cordon, tried to stop the artistic activity of the children. The children were stressed out from what it was happening. The measures taken by the police were equal to the violence from the protesters. We feel sorry that some citizens did not have the chance to see the parade closely” said the Chief from Ministry of Internal Affairs.

At the same time, Alexandru Jizdan mentioned that the police did not use prohibited measures.

“Police does not have prohibited gases in its possession. There are no special measures used only by Moldova. These measures were used according to legislation. We will be examined, will show all necessary information. The accusations are groundless, the special measures were used on most violent people. The Ministry of Internal Affairs does not have the objective to stop mass manifestations. The police has acted according to the pre-established algorithm, according to the law in force” said Jizdan.

PUBLIKA.MD reminds that on Independence Day, many persons tried to attack the police cordons and to throw eggs in militaries (mostly NATO and EU) and children which came to National Assembly Square to celebrate the independence of Moldova.