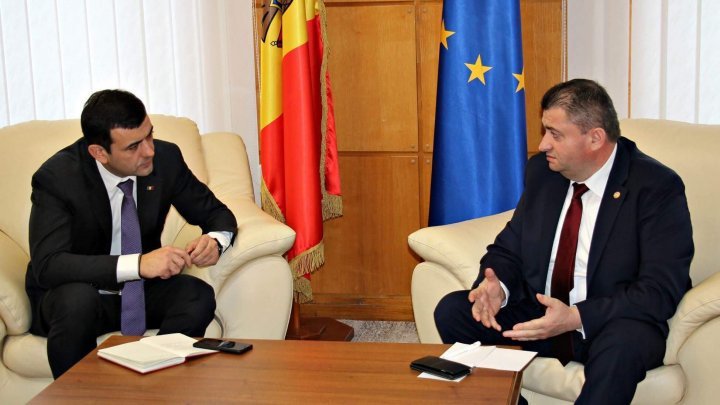 Minister of Economy and Infrastructure, Chiril Gaburici, has met today with Minister of Economy from Romania, Dănuț Andrușcă. Among the main discussed subjects was ensuring energy security for Republic of Moldova, connection our country to the European energy market, attracting Romanian investors, as well as strengthen bilateral trade relations.

At the same time, it was reiterated that Romania remains the main commercial partner of Republic of Moldova.

During the meeting, Ministers Chiril Gaburici and Dănuț Andrușcă also spoke of opening an office in Chisinau of Romanian company Transgaz. Minister of Economy and Infrastructure of Republic of Moldova congratulated company Transgaz, that along with Moldovan company Eurotransgaz, won the auction over state enterprise Vestmoldtransgaz.

Chiril Gaburici handed to the winner a letter stating the procedure for drawing a contract.

"We appreciate that Transgaz came to Republic of Moldova, because it will allow us to gain an alternative source for natural gas, ensuring the energy security of our country" Minister of Economy and Infrastructure said.

In his turn, Minister of Economy, Dănuț Andrușcă, assured that Romania will continue assisting Republic of Moldova and support investment projects, such as energy interconnection with Romania not only in terms of natural gas, but electricity as well.

Last year trade between Romania and Republic of Moldova reached over 1.3 billion USD. At the same time, many foreign companies activating in Moldova have Romanian capital.