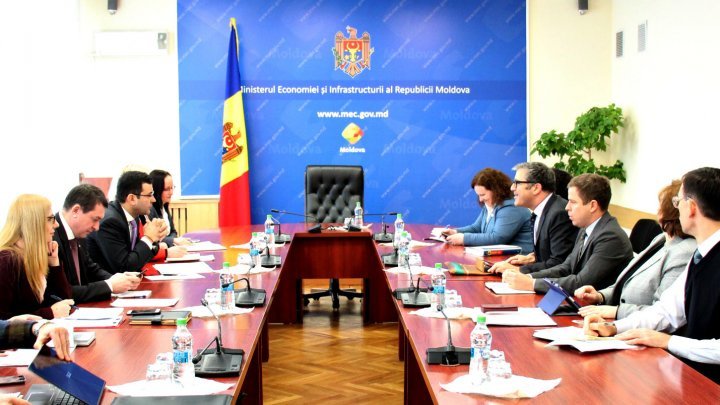 Macroeconomic forecast was one of topics discussed by the Economy Minister Chiril Gaburici in meeting with Monetary Fund Expert Team International (IMF), led by Ben Kelmanson.

In terms of energy security, the Minister of Economy and Infrastructure informed the IMF mission that the investor for the construction of the Ungheni-Chisinau gas pipeline was identified and contract will be signed by the end of the month.

The Government also approved the bill that provides for the special procedure to compensate the owners of real estate for the construction of the Ungheni-Chisinau natural gas pipeline in order to eliminate any risk.

"Energy security is one of the main priorities of the Ministry of Economy and Infrastructure. As regards the Ungheni-Chisinau gas pipeline, we have a well-established plan and concrete steps to take so that in this June, we'll begin the gas pipeline construction ", stressed Chiril Gaburici.

IMF expert team chief Ben Kelmanson has welcomed the Government's efforts in the field of energy, particularly regarding the approval of the new methodology for the calculation, approval and adjustment of tariffs for the electricity distribution service, elaborated by the National Regulatory Agency in Energy (ANRE).

IMF experts have expressed their support for authorities' plans to invest in public infrastructure and have encouraged the Ministry of Economy and Infrastructure to further implement the planned actions.

Another topic discussed was the Good Roads for Moldova program, to be implemented later this year. IMF experts said it was an ambitious project that would benefit  Moldova's citizens.

Finally, Minister Chiril Gaburici expressed gratitude for the IMF's support in the economic reforms and confirmed the determination to complete the implementation of the initiated projects.

The three-year program of Moldova, supported by the IMF, was approved on November 7, 2016. It is funded by a total credit of about $ 187 million, of which $ 83 million has already been earmarked.