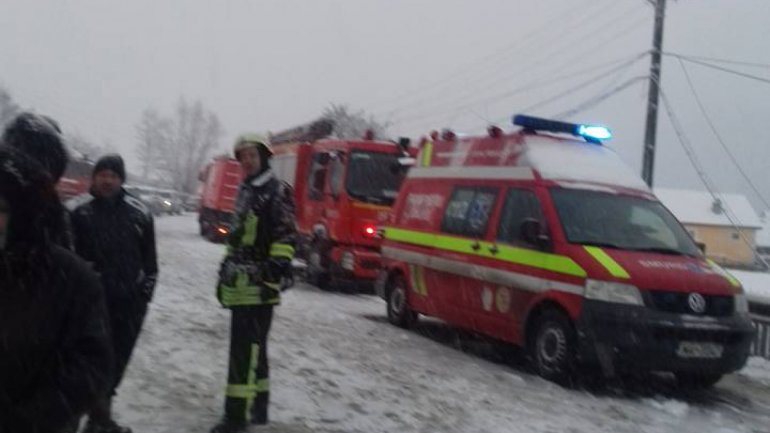 (UPDATE 13:09) The transport company representatives claim that the one of the victims who passed away is a man from Durleşti town, Chişinău. The information regarding the second victim was not yet disclosed.

"We have already informed the wife of the deceased, Denis. We have also taken upon ourselves all expenses to ensure that the bodies are brought home" route's administrator Olga Popescu declared.

According to the Department for Emergency Situations from Chisinau, in the hospital from Topliţa  are admitted 5 citizens of Moldova, with different injuries.

The other victims that have not suffered were already taken by another minibus of the company and brought home.

Authorities from Romania declare that the accident happened due to bad weather conditions.

Read also: Minibus accident in Romania. Company took upon itself to ensure everyone is brought back home

(UPDATE 11:55) Two citizens of Moldova passed away, while another five were injured, in a grave accident from Harghita district, Romania. The victims were in a minibus going Praga - Orhei. Due to the snow and frost the vehicle went off the lane, hit a pillar and was overthrown.

"The accident took place in early morning. Two Police Inspectorates interfered, from Harghita and from Neamţ. It is known that two people passed away, a man and a woman. There was also a toddler, but she is under no danger" Raed Arafat, the chief of Department for Emergency Situations, declared.

When the accident took place, it was snowing heavily.

The arrival of two dispatched ambulances was difficult due to the weather conditions.

Read also: Minibus accident in Romania. 18 of 20 victims were from Moldova

(UPDATE 11:51) Ministry of Foreign Affairs and European Integration are taking actions regarding the accident which took place this morning in Harghita district, Romania.

The Ministry will return with more information.

(UPDATE 11:27) Prime Minister Pavel Filip has requested the explanation of all circumstances of the accident, which happened in morning in Romania, implicating citizens of Republic of Moldova.

The official has invoked for assistance to be offered for people who had to suffer resulting the accident.

(UPDATE 09:56) According to the local Police's spokesman, Gheorghe Filip, the 7 injured were transported to the Hospital from Topliţa. Among them counts a 2-year-old child. The toddler, who at the time of the accident was held by the mother, is unharmed, but was taken to the hospital for a check up.

The accident supposedly happened due to ignorance of road's condition and speed.

(09:34) Harghita is alerted, after a minibus with 20 passengers was overthrown between Borsec and Tulgheş. At least two people have passed away, wrote MEDIAFAX. "So far 2 people were declared dead, 11 injured and 7 are being checked by doctors" reported IGSU.

According to the police, the accident took place after the vehicle skidded, the road being covered by snow.

"There were 19 passengers in the minibus, plus the driver. It was a regular course Praga – Odorheiu Secuiesc – Republic of Moldova. On DN15, between Borsec and Tulgheş, due to not using proper speed in the given weather condition. The vehicle skidded and the driver lost control, hitting a pillar and being overthrown. Two people were found dead, a man and woman from Republic of Moldova" spokesman of Police Inspectorate of Harghita District, Gheorghe Filip said.

Raed Arafat, the chief of Department for Emergency Situations, declared for MEDIAFAX that a child was in the minibus from the Harghita accident, but is in no danger.

"We speak of a minibus. We do not yet know what or why the accident happened, but two Police Inspectorates interfered, from Harghita and from Neamţ. Multiple SMURD cars were dispatched, ambulance and firefighters. At the moment we know of two deceased and a child, who is in no danger. Seven people were taken to the hospital. Of course, everything might change" Raed Arafat declared for MEDIAFAX.

According to Romanian General Inspectorate for Emergency Situations, on the site were dispatched a fire engine, 2 firefighter teams, 5  SMURD ambulances and 3 local ambulances.