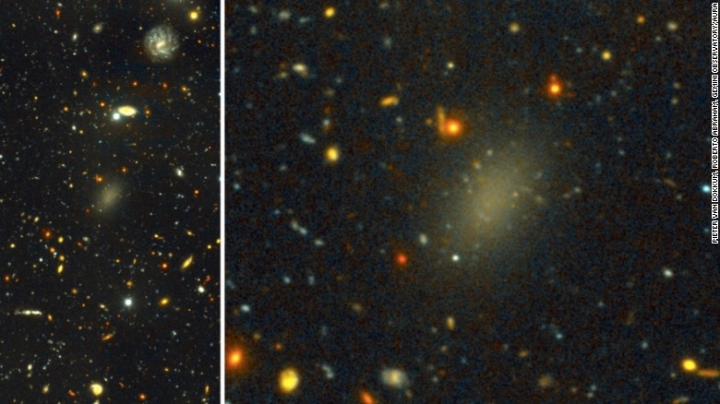 Welcome to the dark side of the universe. In a direct contrast with the beautifully bright Milky Way galaxy, a "dark twin" called Dragonfly 44 has been discovered 300 million light-years away in the Coma constellation, according to a new study.

But don't cue "Star Wars' " Imperial March theme music or Darth Vader breathing just yet (even if the closeup image looks like a slightly creepy emoji). Although it's massive and mysterious, Dragonfly 44 is really just misunderstood.

Dragonfly 44 went unnoticed until last year because, when regarding the darkness of space, this galaxy resembles a virtually indistinguishable blob. But by looking at it with some of the world's most powerful telescopes, including the Dragonfly telescope array designed and built by study authors Pieter van Dokkum and Roberto Abraham, researchers realized something else. It is named for the telescope that found it.

Dragonfly 44 is an incredibly large but diffuse and dim galaxy. Encircling its core is a halo made up of clusters of stars, much like what we see in the Milky Way. But this galaxy is only 0.1% stars. The Milky Way has more than a hundred times that. The researchers knew that something had to be holding those few stars in place.