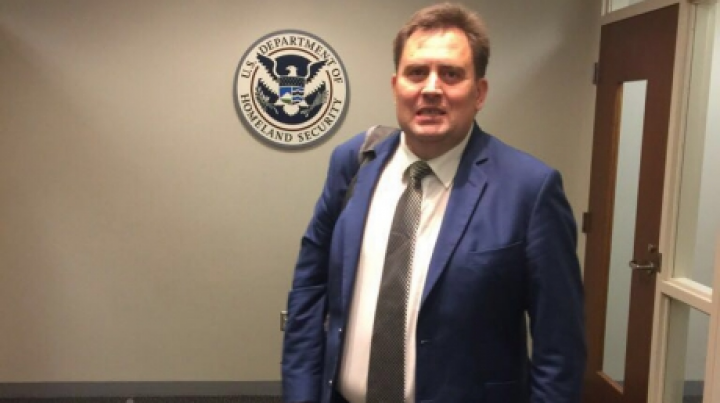 Scandals around the name of the former president of the Service of Prevention and Control of Money Laundering from CNA, Mihail Gofman, are unstoppable.

According to the web portal today.md, Gofman has gone to USA, at the invitation received from the lawyer John Sandweg, involved in a huge scandal, after being named as chief of the Immigration and Customs Enforcement in USA.

After a fight, the lawyer had to resign.

At the Jurnal TV television post, which is owned by the fugitive oligarchs Victor and Viorel Topa, the image of John Sandweg was associated to the US State Department, which is fake.

Actually, Sandweg is a simple lawyer who represented in the law court delinquents accused of pedophilia and homicide, and now has specialized in the migration law.

Also, in a picture published in the media it is seen that Mihail Gofman, together with Sandweg, have visited the office for migration from the Homeland Security Department, an institution responsible for the migrant problems.

According to web portal moldova24.info, it is assumed that Gofman left to US to request political asylum in order to avoid an eventual punishment in the BEM fraud case file. Even though it was said that they will discuss the problems in the banking system.

On Monday, Mihail Gofman did not come to the Prosecutor’s Office for hearing, after being cited for the third time.

Meanwhile, in the media was published a letter, according to which Gofman is in USA to give consultancy to an American company.

Last week, deschide.md wrote that Alexei Gofman, Mihail Gofman’s brother, was involved in the loans given by BEM in the period of the fraud registered in this bank institution.

Prosecutor Adriana Betisor has declared for the same portal that she has information confirming the fact that the company with which BEM signed for the evaluation of the loans is controlled by Mihail and Alexei Gofman.