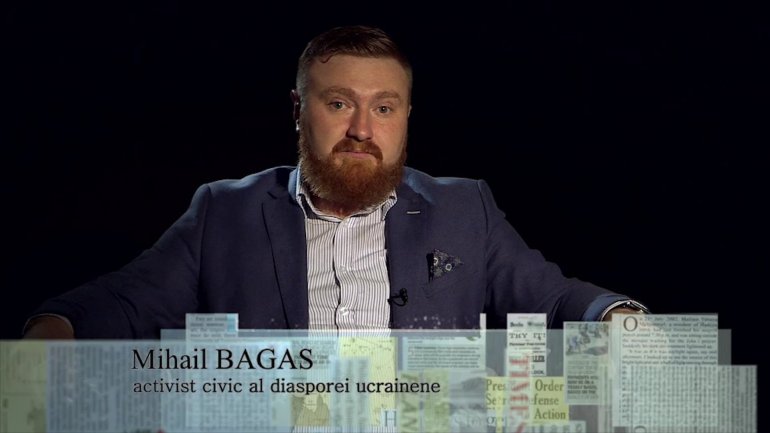 Mihail Bagas, civil activist of Ukrainian diaspora in Moldova, star guest at last episode of EuroDicţionar staring Cristian Tabără declared that in Republic of Moldova people became easier manipulated with the sole word diaspora. Still, the population needs to understand the full meaning behind this word.
During the TV show,  Mihail Bagas has explained what it means to be an Ukrainian in Republic of Moldova, what issues he faces and who protects his right here.
"Diaspora and its representatives are people born in another country, but have a different nationality, therefore I am an Ukrainian that was born in Moldova and am a representative of diaspora. My parents where migrants who left Ukraine for Moldova, for them Ukraine remains their homeland, as they were born there. I on the other hand, have a different motherland- Moldova and not Ukraine. Yes, I am Ukrainian and yes I can speak Ukrainian and my documents state that I am a Ukrainian, but I am a citizen of Moldova and this is my home" Mihail Bagas explained.
According to  Bagas, we live in a country that has its own state language, Romanian.
"It is written in law that we have the right to study our own language, Ukrainian, as well as study in Romanian. We live in a country that has its own state language, written in the Constitution, Romanian. I do not understand the fact that a man from Moldova, born in a village and who spoke his whole life in Romania, comes to the city and cannot find a job, due to not speaking Russian, it is a discrimination" Mihail Bagas concluded.
EuroDicţionar is broadcast each Sunday at 17:10 on PUBLIKA TV.
You can also follow their Facebook page: https://www.facebook.com/eurodictionar
AFLĂ imediat Știrile Publika.MD. Intră pe Telegram