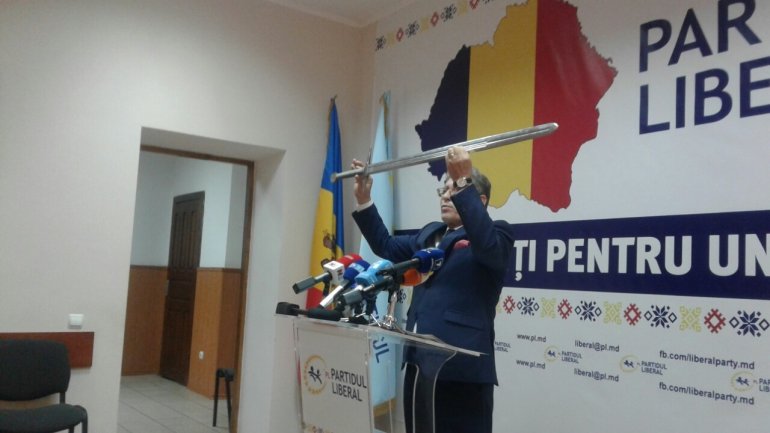 Liberals will defend with all might the commemorative stone from the Great Assembly Square, dedicated to soviet occupancy. The declaration was made by PL leader Mihai Ghimpu during a press conference. The reaction comes after the president-elect Igor Dodon say that it will be dismantled. In order to show Dodon that he is prepared to keep his promises, Ghimpu came in front of journalists with a sword.

The stone who brought the feud between the two of them was installed according to the presidential decree issued by Ghimpu during his period of being interim head of state.

"I don't want to say that I will do as Stephen the Great did with the traitors that he will pay with his life. I take this sword of Stephen the Great and I show it to Dodon, that we can defend the country and the stone and even if you won't pay with your life, for sure you will kiss this sword" said Ghimpu.

During the conference, Mihai Ghimpu warned him many times to not touch the commemorative stone:

"Thus stone is not of Mihai Ghimpu, this stone is of those who suffered and, how was he holding it? It is stronger than your military tank, comrade Dodon."

At the end of November 2016, Igor Dodon declared in an interview that he will dismantle the stone from the Great Assembly Square and will transform it into gravel for the rehabilitation of some roads in Chisinau. The monument was installed in the center of Chisinau on 28 June 2010, when it was declared commemoration day of soviet occupation.

Afterwards, the Constitution Court decided that the decree is non-constitutional. At the same time, two days ago, the socialist deputies were guarding the military tank from Cornesti village, Ungheni district, after they found out that the Defense minister Anatol Salaru wants to take out the vehicle and to bring it to the Museum of Military history in Chisinau.