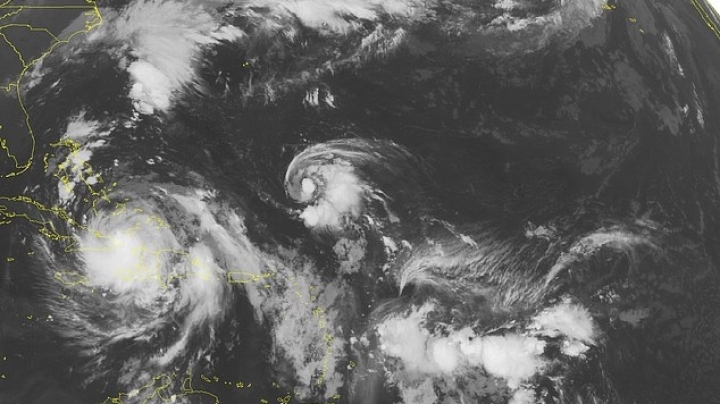 It is the strongest storm since 2004, and Hurricane Matthew looks set to continue wreaking havoc on the southeast coast of the US.

The storm hit Florida in the earlier hours of this morning, and forecasters say that it isn't done yet, reports Daily Mail.

They suggest that Hurricane Matthew could even loop back around on itself, hitting Florida for a second time - although forecasts are continually changing.

Experts have explained to MailOnline the science behind Hurricane Matthew's strange behaviour.

Most hurricanes that hit the East Coast tend to move northwest around the Bermuda high. But that may not be the case with Hurricane Matthew.

Dr Chris Holloway, a researcher from the Department of Meteorology at the University of Reading, told MailOnline: 'The models are forecasting that the next trough [of low pressure] coming over the eastern US will be too weak and too far north to completely carry Matthew away.

So Matthew will start to curve to the north and northeast along the Georgia and South Carolina coasts but then will be influenced again by the high pressure system and pushed back around to the south and southwest.

This could eventually steer the storm back over Florida and into the Gulf of Mexico, although it is forecast to be much weaker, only tropical storm strength, as it approaches Florida again.'

With winds of 120 mph, Hurricane Matthew is now listed as a Category 3 hurricane, which is defined as 'Winds ranging from 111 to 130 mph cause significant damage to property, humans, and animals.'

It is the first major hurricane to make landfall in the United States since Wilma in October 2005.

Wilma's winds at landfall were 120 mph, and earlier that year, Hurricane Katrina hit with winds of 125 mph.

Jeff Masters, a former hurricane hunter meteorologist and meteorology director of Weather Underground said: 'There's no question that it's going to have major impacts.

MIT meteorology professor Kerry Emanuel added: 'It could give a very extensive part of the Southeast coastline a pounding, and if it's moving very slowly, a lot of rain.'