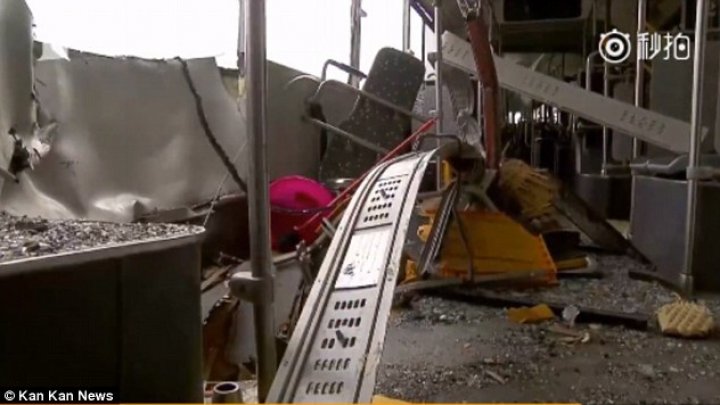 A bus was hit by a large metal rod that plunged 84 meters from a skyscraper in the busiest area of Shanghai, China, yesterday morning, wrote dailymail.co.uk.

One passenger cheated death after the pole smashed through the vehicle just centimetersfrom him.

Shanghai police said the debris had fallen 28 floors from the exterior wall of an office building on the windy day.

According to Kan Kan News, the bus no. 71 was passing under the Ocean Towers in downtown Shanghai around 6:30am on March 5 when a metal rod dropped from the 28th floor and hit the ground.

The bus was travelling from The Bund to Shenkun road bus terminal with one passenger on board.

Surveillance camera footage shows a man is sitting on the right close to an exit. He was using his phone as the windows of the bus broke and debris flew all over in the carriage.

There were no reports of any injuries, according to Shanghai traffic police.

Officers considered adverse weather condition could be one of the factors that caused the incident.

The bus was taken to a garage for policemen to inspect.

The cause of the crash is still under investigation, however, a weather record from Shanghai Pudong Meteorological Bureau showed that a yellow gale alert had been issued at around 8:37pm the night before.