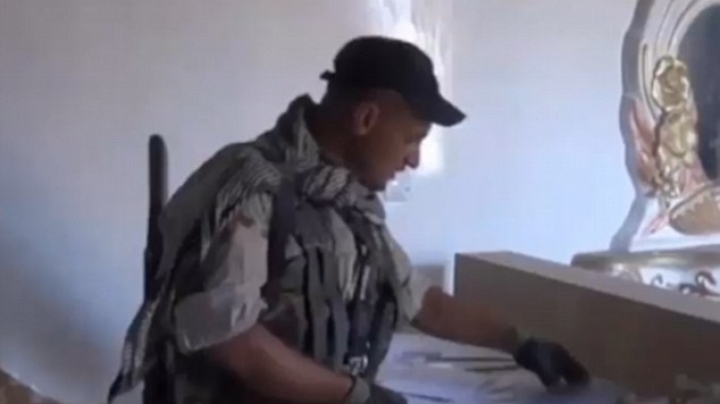 US-backed forces have toured an ISIS 'religious police' headquarters where women were tortured with poles and chains if they were spotted without their faces covered, in the city of Manbij, reports Daily Mail.

Syrian Democratic Forces reclaimed the building this week and posted a video of the horrific torture apparatus they found inside, after they successfully defeated the terror group near the Turkish border in northern Syria.

In the video, an SDF fighter explains the 'Hasba centre' is what ISIS call its 'religious police' headquarters.

Men would observe the attire and behaviour of the local people and bring them to the torture centre if they were spotted breaking the strict Sharia Law rules.

ISIS would hold their prisoners in the religious police centre for two days and then transfer them elsewhere - but if the prisoners had money they could sometimes leave immediately.

Another room inside the prison included a television where prisoners were shown ISIS propaganda videos 'in an attempt to deceive them'.

Documents left behind by jihadis show how a shop owner and a woman were arrested because she uncovered her face next to him.

Earlier this week, harrowing footage emerged of the moment a young Syrian boy desperately tried to stop his mother from removing her niqab after the family were rescued from the clutches of ISIS.

The boy and his mother had been freed from the terror group's rule in the shattered streets of Manbij when she uncovered her face to wipe away her tears.

The little boy, who was used to living in fear that his mother will be punished if she doesn't cover her face, attempts to pull the black material back over her mouth.