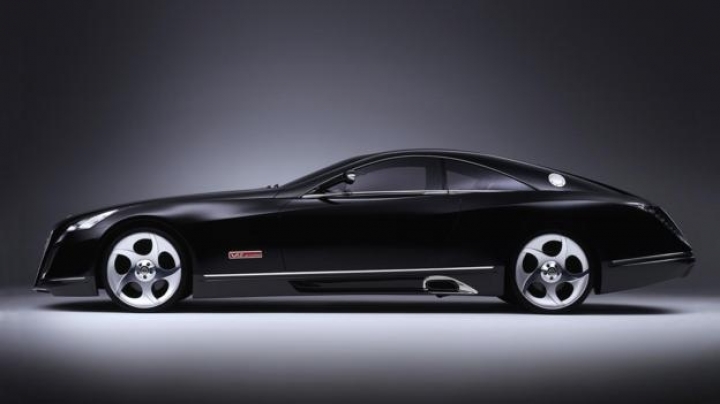 This week, Mercedes-Maybach revealed, in shadowy profile, its forthcoming concept coupé, set to be unveiled on 21 August at the Pebble Beach Concours d'Elegance in California. And though the single mysterious photograph you see above speaks volumes about the car's raison d'être, the German ultra-luxe carmaker shared with this image no mechanical details, no performance figures, no purple prose about the depths of its opulence or the meticulousness of its Old Worlde craftsmanship. That will come, no doubt. But for now, nothing. Not even a name.

The company did feel compelled to tell us how big it is: The Mystery Machine is nearly 20 feet from bumper to bumper, longer than a Rolls-Royce Phantom Extended Wheelbase saloon. That measurement may seem outlandish, even obscene, for a two-door automobile, but really, it takes no more than a cursory glance at Maybach history to realise that, ahem, size runs in the family. Everything from the company’s heyday, in the 1920s and '30s, was cartoonishly outsized, and when parent Daimler revived the Maybach marque in 2002 after a 60-year hiatus, it named the two production models, the 57 and 62 saloons, for their respective lengths, 5.7 and 6.2 metres. In Maybachland, size matters.

So what can we surmise about Mercedes-Maybach's mystery coupé? For one, it will almost certainly use the 6-litre twin-turbocharged V12 from the marque's S600L saloon, doubtless tuned well beyond that car's 523 horsepower, and well beyond the 621 horsepower of the Mercedes-AMG S65 saloon, coupé and cabriolet. A round 700 horsepower sounds about right.

The new concept may have a better shot at reaching the production line than the Exelero, though if it does, it will likely define a class of one. The Rolls-Royce Wraith and Bentley Continental GT can't match its expansiveness, and Rolls-Royce Phantom Coupé is about to reached the end of its road. No matter how deep its opulence and meticulous its craftsmanship turn out to be, one thing about the Mercedes-Maybach Mystery Machine is certain: It will roll into territory not occupied since Lady Penelope bedazzled London in the FAB1, BBC informs.