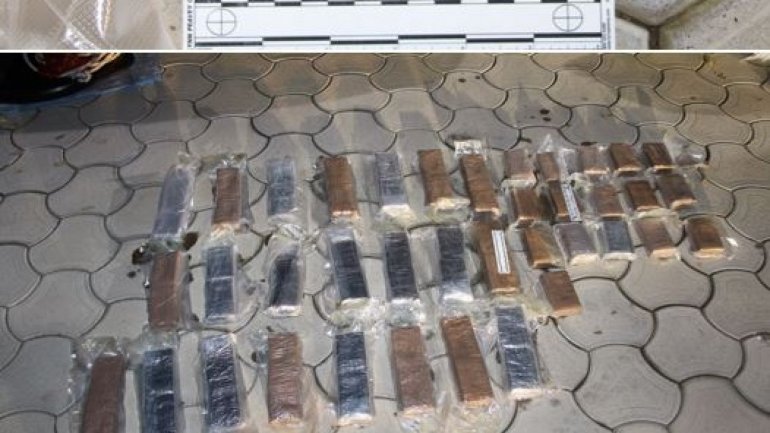 Four members of a criminal group, aging between 30-45, from Căușeni specializing in purchasing, transporting and selling big quantities of drugs, were arrested by law enforcement for 30 days.

According to law enforcement, on 10 November, on their leaders command, the men left for Spain. Where they purchased 30 kg of hashish, which they hid in the fuel of the car and tried to smuggle it into Republic of Moldova.

On 22 November, they attempted to cross Republic of Moldova's border. Therefore, after searching the vehicle, officers found the 30 kg of hashish spread in 39 packages, its value being of 3 million lei.

Prosecutors from PCCOCS, along with their partners from Russia, have documented another case of drug trafficking. Therefore, after trading information with law enforcement from Russia, after taking actions at criminally investigating the case, in July 2017, multiple persons were arrested, officer having found and seized 40 kg of hashish, worth around 4 million lei.

The suspects risk to 15 years of jail time for drug trade and to 10 years for drug smuggling.

The criminal group was acting both in Republic of Moldova, where their leader resides and coordinated the activity using modern technology, such as Viber, skype, WhatsApp etc, as well as abroad.

Their aim was to gain money from illegal transportation and sales of drugs. The group's members are activating in multiple states. Their leader, known as Lică, is residing in Moldova and is coordinating the member's activity through social networks.

The leaders would recruit people who were taking money out of the country to purchase big quantities of hashish from Spain. The drugs were hidden in transport and taken to Russia. One there, they were awaited by other members who would take the hashish, later selling it all over Russia.

The arrested people risks 7 to 15 years of imprisonment for drug trafficking and 3 to 7 years for smuggling big quantities of drugs.