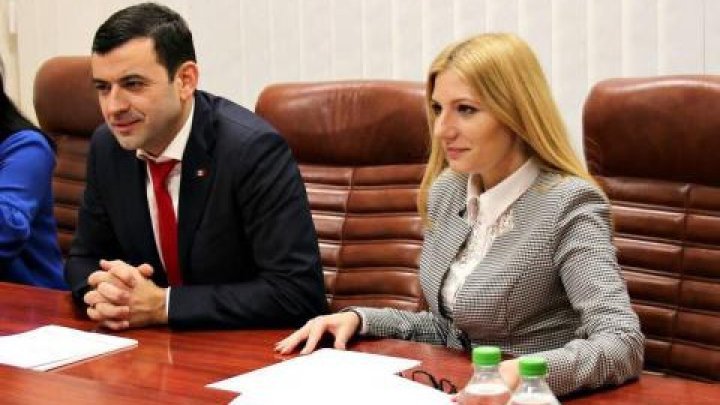 Minister of Economy and Infrastructure, Chiril Gaburici, had a meeting with the Ambassador of the Republic of Azerbaijan in Chisinau, Gudsi Dursun oglu Osmanov.

The officials appreciated the progress made in the bilateral partnership and assessed the possibilities of dynamizing Moldovan-Azeri relations, including in order to increase trade and investment in our country.

Minister Chiril Gaburici has reviewed the priorities of the ministry including the document modification, the facilities offered by the free economic zones, as well as the IT park.

Chiril Gaburici stressed that the Ministry of Economy and Infrastructure is open to deepen mutually beneficial commercial and economic cooperation.

The Ambassador of the Republic of Azerbaijan in Chisinau also appreciated the reforms made in the economic field, for boosting the business environment and attracting foreign investments. Gudsi Dursun oglu Osmanov mentioned that he will make the necessary efforts to strengthen commercial-economic relations.

In this context, the Azerbaijan diplomat congratulated Chiril Gaburici on his appointment as Minister of Economy and Infrastructure, wishing him success in fulfilling his mandate. Referring to the work of Chiril Gaburici at Azercell, the Ambassador said that "the people of Azerbaijan have not forgotten you and your successful work is appreciated so far."

During the meeting, the two officials exchanged views on the importance of reviving the activity of the Moldovan-Azeri intergovernmental commission for commercial-economic cooperation, whose president is the Minister of Economy and Infrastructure, Chiril Gaburici. It was also discussed the possibility of organizing a business forum with the participation of businessmen from the Republic of Moldova and Republic of Azerbaijan.

In 2017, the trade between the two countries increased by 29.34%, compared with 2016, recording a volume of 6.8 million dollars. At present, there are about 120 Azerbaijan companies in Moldova with an investment capital of 32.62 million lei