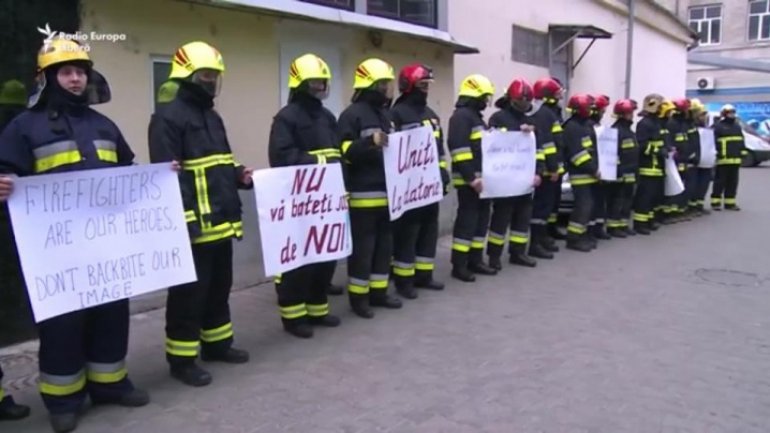 Jurnal TV violating the journalistic ethics and harmed the human dignity. This is the conclusion of the Press Council, after considering the case when the anchors of the satirical show "Ora de ras" from Jurnal TV had made fun of firefighters and of the tragedy in the dead firefighter’s family.

The Press Council underlines the issue of a human tragedy may not be mirrored in a satirical show.

The Press Council was notified by firefighters. Members of the Council showed themselves indignant at a man’s tragedy being used in a show.

"We as the Press Council, if looking through the prism of journalistic ethics, do not consider that a human tragedy, which stirred society, would be a subject for political debates, pamphlets. Look at the video, the money, the money is associated with bribery," said a Council member Ludmila Andronic.

"I don’t want to give epithets, but this goes beyond limits. It’s natural for the Government to provide support. As for Plahotniuc, they say he was the first to donate, I don’t know how his donation can be worse or better than others," said another member Dumitru Ţîra.

"You cannot touch on such a tragic case in a pamphlet show. It’s as if you went with the coffin to the circus," said the member Olga Manole.

The Press Council has called on Jurnal TV to avoid using tragedies in satire shows.

"The Members of the Press Council consider the subject from the Ora de ras show as running counter the general journalistic ethics principles and harmed the human dignity," said the manager of a media NGO, Petru Macovei.

On Wednesday, tens of firefighters staged a protest in front of Jurnal TV, the station of the runaway felon Victor Ţopa.

In their show "Ora de ras" from Jurnal TV, the anchors neglected the pain of the dead firefighter Ion Nagailîc and mirrored it in a cynical way. They made fun that the hero firefighter had a mortgage.

Hundreds of citizens have signed an online petition demanding sanctioning Jurnal TV and halting its propaganda. The signatories leave critical messages addressed to the show athors Cheianu and Durbală:

"Durbală and Cheianu are degraded and the Broadcasting Council should withdraw the license of Jurnal TV, they went beyond any limit."

"The tragedy and the tears of a family and of a country are not jokes."

On 11 November, the firefighter Ion Nagailîc died as he was extinguishing a huge fire in a building in Chisinau. He fell from a height of 3.5 m, because of law visibility.

He was 28 and a father of two little girls.