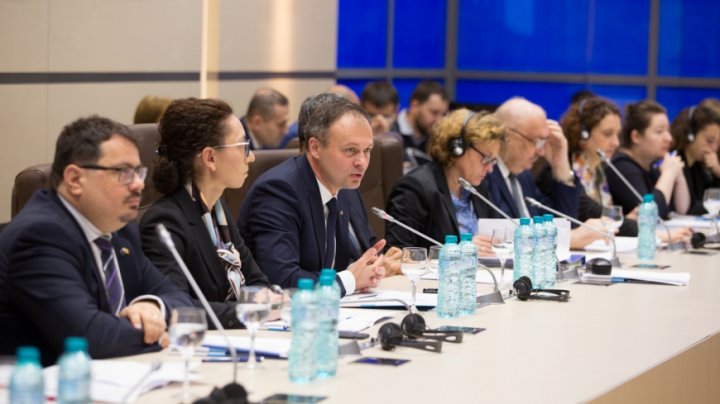 The closing conference of the joint Council of Europe - European Union project "Promoting media freedom and pluralism in the Republic of Moldova" was held in Chisinau on 14 December 2018. The participants assessed the achievements of the project and identified areas for potential further cooperation with the Council of Europe.

The conference was attended by members of the Moldovan Parliament and of the audiovisual regulator, by diplomats, media professionals and independent media experts.

The Speaker of the Moldovan Parliament Andrian Candu thanked the Council of Europe for supporting the first ever working group mandated to align the Moldovan media legislation with European standards and for providing expert assistance in drafting the new Audiovisual Code and the first ever Media Development Strategy.

“The Parliament adopted both documents taking into account an important number of recommendations by the Council of Europe experts. The working group had an ambitious agenda. We managed to adopt four out of eight bills developed by working group members. We are committed to continue discussing and adopting the remaining drafts”, Andrian Candu said.

William Massolin, Head of the Council of Europe Office in Chisinau, highlighted in particular the achievements of the project in the area of public-service broadcasting.

“The project created a training centre at the public-service broadcaster Teleradio-Moldova and provided crucial support in setting up the documentary films department Telefilm-Chisinau as a centre of journalistic excellence aimed at enhancing the quality of Teleradio-Moldova video productions and ensuring content diversification. In Gagauzia, we provided support to the regional public broadcaster in setting up the Multimedia unit and in drafting the company’s development strategy for the next five years”, William Massolin said.

Silvia Grundmann, Head of the Media and Internet Division of the Council of Europe, stressed that in view of the forthcoming elections it is important to continue to support the media sector in Moldova and to provide assistance in reforming it.

“We further rely on your openness and the readiness of Moldovan authorities and broadcasters to benefit of our technical assistance. Only with common efforts will we be able to promote media freedom and pluralism in the Republic of Moldova”, said Silvia Grundmann.

The two-year project “Promoting media freedom and pluralism in the Republic of Moldova” assisted Moldova to strengthen its broadcasting sector through implementation of European standards in the regulatory framework and enhancing the professionalism of public-service broadcasters.