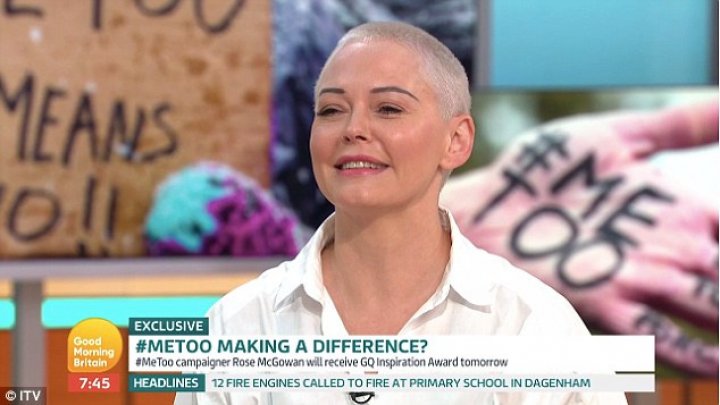 Maureen Lipman has blasted the #MeToo movement, saying it has gone too far and risks 'wiping out men'.

The 72-year-old veteran actress called the campaign 'knee-jerk' and 'confusing' and said celebrities who parade around dressed like 'prostitutes' are sending out mixed messages to men.

Controversially, the star, who will appear in a new role in Coronation Street this month, also said she would still work with director Woody Allen, despite his daughter Dylan's unproven claims of abuse.

She said: 'The only reason not to work with Woody now is that the films are rubbish', otherwise, she continued, 'who wouldn't work with him if he's going to redo Hannah and Her Sisters?'

Speaking to Radio Times, she also claimed film director Roman Polanski, who is still on the run from American justice after being convicted of statutory rape in 1977, had suffered enough punishment.

She said: 'Sixty years of punishment is probably enough. We've got to stop judging everybody now on the mores of then.

'In the Sixties it was very plausible for a young girl to be brought to Jack Nicholson's house and left with Roman Polanski. It wasn't an unusual thing.'

The Hull-born actress and comedienne said we risk going 'too far', adding: 'We mustn't wipe out men. I know men have brutalised women over centuries, but I don't think the message we're giving out with #MeToo is right.

'It's too all-inclusive, and it smacks to me of the reaction to Jimmy Savile: 'We messed up big time [by not uncovering his crimes sooner], now let's get every light entertainer and unfashionable comedian or performer - let's get 'em for putting a hand on a knee 40 years ago.' That is just knee-jerk.'

Miss Lipman also hit out at women who send out mixed messages by dressing provocatively and then refuse to flirt with men.

She said: 'All this bondage clothing - dressed a bit like a prostitute would have dressed. But if you speak to a real feminist, they'll say, 'It's my body.'

'Young female pop stars today, for example, are saying: 'It's my body, and I'm empowered to show it to you.' But then: 'Don't touch it, don't come near it, don't flirt with it.'

'And that is a bit of a shame because flirting is some of the best fun you've ever had in your life.'The star added: 'We're batting our eyelids and clenching our teeth at the same time. And that is very confusing.'

The #MeToo anti-harassment campaign, which started after allegations were made against disgraced movie producer Harvey Weinstein last year, has seen stars use the hashtag to share stories of sexism and abuse.

'MeToo is not just for women.....I've had so many men share their stories of abuse with men... Let people breathe and have their voice.'

And she added: 'If I feel like walking down the street naked, nobody has the right to rape me.... Everybody has a sovereign right to their body.'

McGowan said that the last few years had 'taken a toll', saying. 'I do sometimes fear for my health in the long term, the stress levels.'

Lipman's comments come after French actress, Catherine Deneuve, 74, was forced to apologise to sexual assault victims after condemning the campaign as a 'witch -hunt'.

The star was one of 100 women to sign an open letter in January denouncing what they described as the 'puritanism' that has emerged since the Weinstein allegations.

Another veteran French actress, Brigitte Bardot, 83, later criticised 'hypocritical' actresses for flirting with film bosses and then claiming to have been sexually harassed.

Lipman also said she would never do Strictly Come Dancing because the 'pretty' one always wins.

She said she had been asked to do 'most' reality TV shows and was 'terribly tempted' by Strictly.

However, she added: 'The fact is that the person who's pretty, whether it's Joe McFadden or Abbey Clancy, is going to win. It ain't gonna be Ann Widdecombe.

'So if you want to have Craig [Revel Horwood] telling you that your arms are like old windmill sails, it's fine.

'But I'm quite sensitive. If I work hard, I like a bit of praise. And I get very upset on behalf of even Edwina Currie... Well, maybe that's pushing it.'