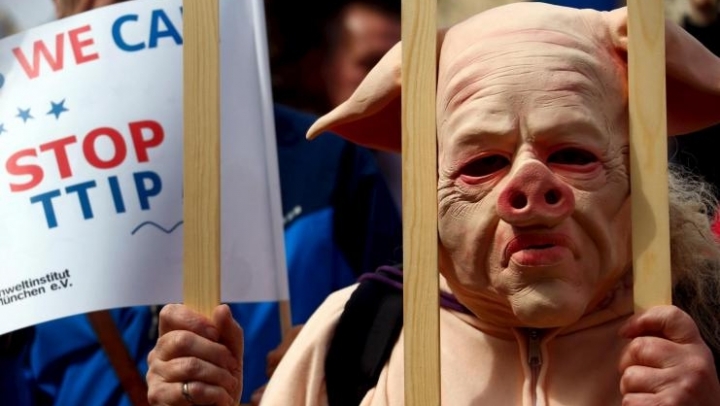 Tens of thousands of people protested in European cities on Saturday against planned free trade deals with the United States and Canada they say would undermine democracy and lower food safety, environmental and labor standards.

Organizers -- an alliance of environmental groups, labor unions and opposition parties -- said 320,000 people took part in rallies in seven German cities, including Berlin, Hamburg, Munich and Frankfurt. Police put the figure at around 180,000.

Smaller protests were also planned in other European cities, including Vienna and Salzburg in Austria and Gothenburg and Stockholm in Sweden.

The demonstrations are against the Transatlantic Trade and Investment Partnership (TTIP) with the United States and the Comprehensive Economic Trade Agreement (CETA) with Canada, currently being negotiated by the European Union's executive with the respective governments across the Atlantic.

Opposition in Europe to the trade deals has risen over the past year, with critics saying the pacts would hand too much power to big multinationals at the expense of consumers and workers by establishing arbitration courts to settle disputes between companies and governments.