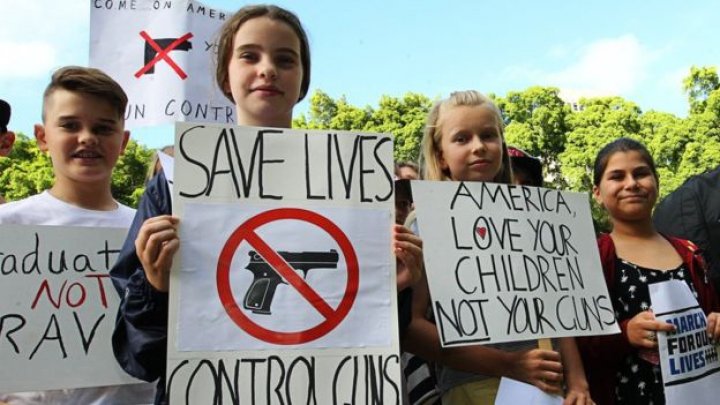 Hundreds of thousands of Americans are expected to turn out for rallies across the country later on Saturday in support of tighter gun control.

March For Our Lives grew out of a movement calling for change after 17 people were killed by a gunman at a high school in Florida last month.

On Friday, the White House said it would ban bump stocks, which give semi-automatic guns rapid-fire capability.

But many activists are calling for more extensive legislation.

They want to seize on public outrage in the wake of the 14 February massacre at Marjory Stoneman Douglas High School in Parkland to convince US politicians to finally take decisive action, including by banning the sale of assault weapons.

However, the issue divides Americans. The right to bear arms is protected under the 2nd amendment of the US constitution and the National Rifle Association (NRA) gun lobby remains highly influential.

Organisers say up to half a million people could rally in Washington DC later on Saturday in a protest that would be the largest since last year's women's march. The singer Ariana Grande and Lin-Manuel Miranda, the man behind hit musical Hamilton, are set to perform.

Hundreds of events are scheduled all over the US, and globally - including in UK cities like Edinburgh.

"This issue is going to turn into the No 1 issue in this country. I know that's not only what I want, but I know it's what you guys want," Marjory Stoneman Douglas student, Alfonso Calderon, told students in Washington on Thursday, ahead of the march.

Some 69% of Americans think gun laws should be tightened, according to a new poll by the Associated Press and the NORC Center for Public Affairs Research, up from 61% in October 2016.