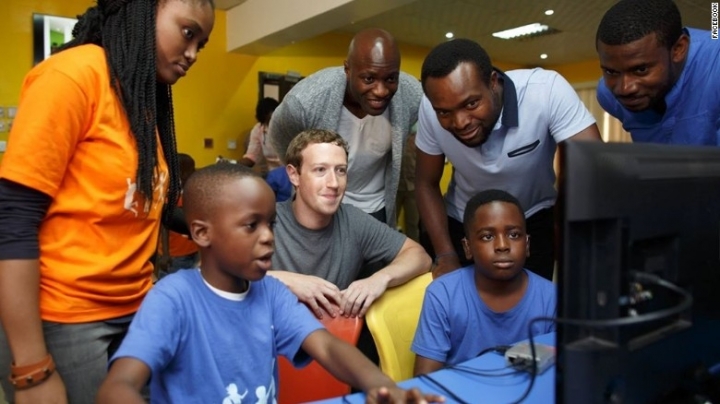 Zuckerberg staged a surprise visit to the country's economic capital Lagos on Tuesday and his first stop was a local innovation center and tech hub in Yaba, an area on the mainland of Lagos known as Nigeria's Silicon Valley.

There was no fanfare amid tight security and some of those working at the Co-Creation Hub, called CcHUB, didn't even know Zuckberg was coming.

He appeared nervous, a little startled even, as he launched into an impromptu speech about why he was there.
He said: "This is my first trip to sub-Saharan Africa. I'll be meeting with developers and entrepreneurs, and learning about the startup ecosystem in Nigeria. The energy here is amazing and I'm excited to learn as much as I can."

At the CcHUB, he talked to children at a summer coding camp and entrepreneurs who visit the center to build and launch their apps.

Zuckerberg thrilled Nigerians by walking around the streets of Lagos without any signs of armed guards or heavy security. He was also spotted jogging on the Lekki Bridge Wednesday morning.