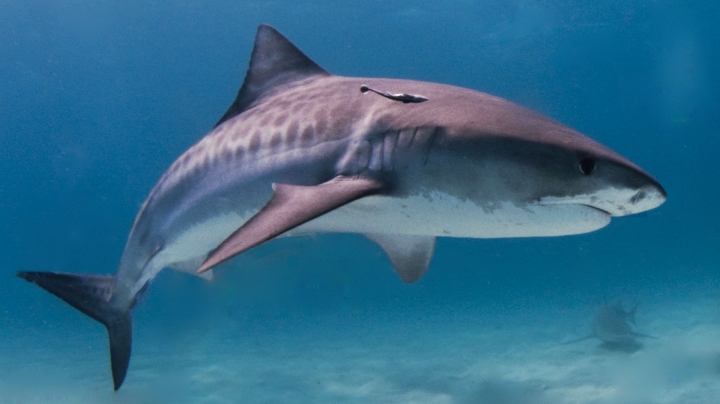 For the first time ever, scientists have captured sonogram of a pregnant tiger shark, reports Daily Mail.

Marine scientists have performed an ultrasound exam on a 12-foot-long tiger shark named Emily, finding 20 well-developed pups in her womb.

The footage was revealed during Discovery’s Shark Week, and marks a huge milestone in the field – before now, scientists would have to cut open a shark to determine if she was pregnant.

Researchers say the tiger shark was roughly two-thirds of the way through her pregnancy at the time of the achievement.

‘It was absolutely amazing, she was full of well-developed pups. I’ve never seen this before – she was just jam packed,’ James Sulikowski, PhD, professor of marine science at the University of New England says in the video.

The team estimates that the babies are about 40-45 centimetres long each, and are just a few months away from being born into the world.

‘The amount of pups that you can see in there is really the thing that sticks out to me,’ said Carolyn Wheeler, Research Assistant at Sulikowski Lab at the University of New England, in the video.

‘It was amazing being able to look in there and basically seeing faces looking back at you.’

In the video, the researchers have highlighted the individual sharks that can be seen, outlining their shapes to reveal fins, eyes, and rows of sharp teeth.

The find has huge implications for future studies.

‘Historically if you wanted to see if a tiger shark was pregnant, you’d have to cut her up,’ Neil Hammerschlag told Discovery.

After the ultrasound, researchers fitted Emily with an acoustic and satellite tag, allowing them to track her ‘from Tiger Beach to the deep Atlantic.’

Doing this will provide new insight on the habits of pregnant tiger sharks, the researchers explain, and help to make advancements in conservation efforts.

In about a year, the tag will tall off, and Emily’s fin will heal completely.

‘One of the nice things about combining this technology, the satellite and the ultrasound, is that we’ll know where these pregnant females go,’ Sulikowski says in the video.

‘If they go to a certain area, this nursery ground to give birth, then we can protect that area, which would advance and allow us to conserve and manage the species much better.’