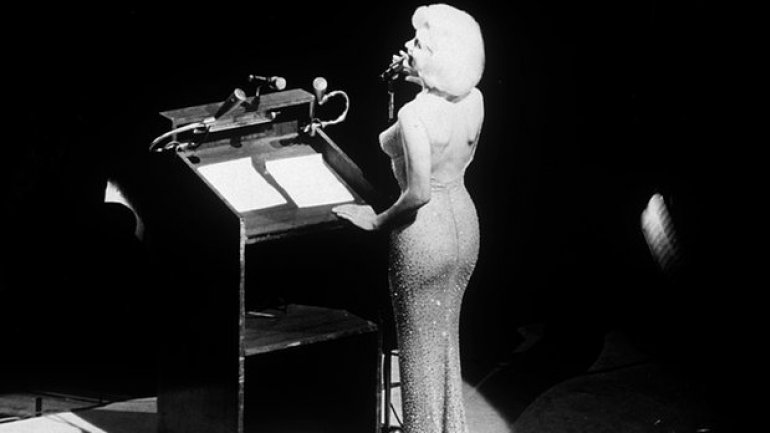 The famous dress worn by Marilyn Monroe when she sang “happy birthday Mr President” to John F Kennedy has sold for a world-record price at auction, fetching $4.8 million, reports The Guardian.

The sheer, flesh-colored design, which features more than 2,500 hand-stitched crystals, had a pre-sale estimate of $3 million before it went under the hammer at Julien’s Auctions in Los Angeles.

It was bought by museum chain Ripley’s Believe It Or Not, surpassing the previous most expensive dress sold at auction – Monroe’s white costume from The Seven Year Itch – which went for $4.6 million in 2011.

Edward Meyer, vice-president of Ripley’s Believe It Or Not, told the Press Association: “We believe this is the most iconic piece of pop culture that there is. In the 20th century I cannot think of one single item that tells the story of the 1960s as well as this dress. It’s a new world record for a dress.”

Meyer said it was likely the dress would go on display at Ripley’s Believe It Or Not in Hollywood before moving to different branches around the world.

The custom-made Jean Louis gown was so tight fitting that Monroe was said to have been sewn into it before she performed for Kennedy on 19 May 1962, ahead of his 45th birthday.

Monroe sang her version of happy birthday in her trademark tones in front of 15,000 guests at a Democratic fundraiser at New York’s Madison Square Garden.

Actor Peter Lawford had introduced the Some Like It Hot star as the “late Marilyn Monroe”, referring to the actress’s reputation for tardiness.

It was one of her last public appearances before her death from a drug overdose.

The performance sparked rumors of an affair between Monroe and Kennedy, who was assassinated on 22 November 1963.

Martin Nolan, executive director of Julien’s Auctions, said: “This dress, this story, this momentous occasion represents a defining moment in history. This auction will remind the world why Marilyn Monroe remains an icon.”

Darren Julien, president of Julien’s Auctions, added: “That rendition has lived on for decades as one of the most remarkable events in her career and certainly one of the most storied tales in popular culture history – a moment in time squarely at the centre of the 1960s, Hollywood and Camelot.”

Hundreds of Monroe’s items are going up for auction over three days including the beaded cocktail dress worn by the actress in Some Like It Hot, which sold for $375,000.

The happy birthday dress was presented at the auction on a custom-made mannequin designed to match Monroe’s exact body measurements.

It had previously been sold to a collector for a then-record $1.27 million at a Christie’s auction in New York in 1999.