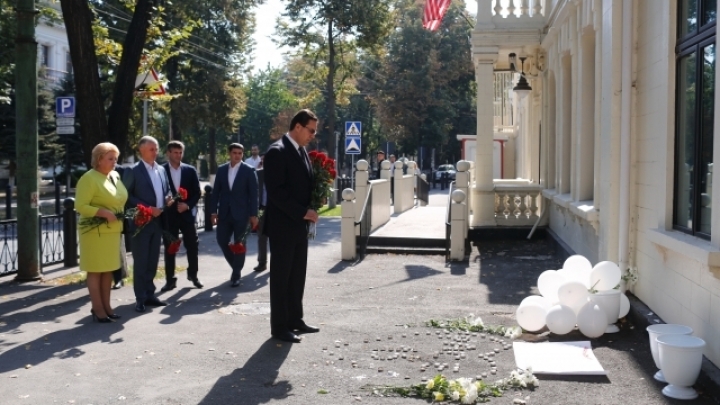 Democratic Party of Moldova members are in solidarity with American people, today after 15 years of producing bloody terrorist attacks on September 11th, 2001.

PDM leader Marian Lupu, accompanied by team of Democrats from the Government, went to the US Embassy in Chisinau, where they laid flowers and sent a message of solidarity.

"We are here today to send a message of solidarity to American people and thoughts of sympathy for the tragedy that took place 15 years ago. Those bloody attacks were not just an act of boundless cruelty that took the lives of thousands of people but also an attack on peace and democracy."

Also, Marian Lupu hasspecified that this tragedy must remain the dividing line between the free world and those who seek to undermine it.

"We have an obligation to never forget the tragedy that the American people had to go through.It must remain the dividing line between the free world in which we want to live and those who seek to undermine it. We stand by the pain of those who lost their relatives and we firmly believe that only by being free, together we can build a better life" , said Marian Lupu.