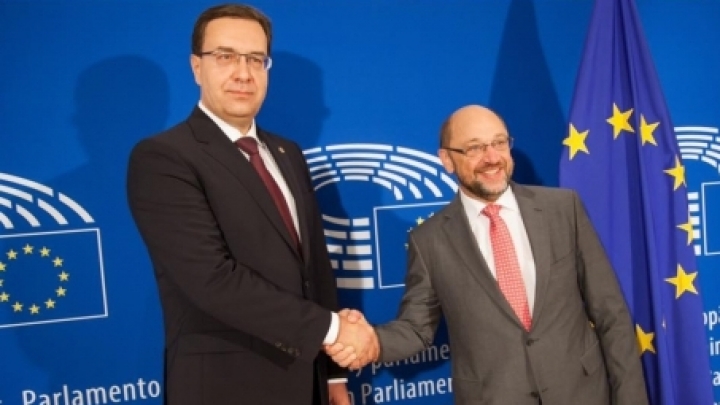 Democratic Party President Marian Lupu has ended his tour of visits abroad, as he tripped to Bratislava, New York and Brussels. He has met scores of meetings with top EU officials, party leaders, former and acting premiers, MPs – decision makers related to the politics of many European countries and of the EU.

Back to Moldova, Marian Lupu has said the trips have been aiming at pleading Moldova’s European path in front of Social-Democratic colleagues.

”It’s very important that Moldova is talked about in such high-rank international reunions, it’s very important to make our foreign partners pay attention to the progress and challenges of this country,” he said at a briefing at Chișinău Airport.

Marian Lupu underlines he has seen an important support for Moldova’s European course in Bratislava, New-York and Brussels.

”We want Moldova on the EU’s agenda, its problems and requests taken into account by European decision makers. After the visits of these weeks, I can assert Moldova matters for the European and International Social-Democratic family. Moldova’s voice has been heard, our pro-European and pro-modernization message is clear, and the Social-Democrats’ support for Moldova is going to be even more significant,” the PDM president maintained.

On Wednesday and Tuesday, in Brussels, Marian Lupu had a series of meetings with the Socialists and Democrats group from the European Parliament: Gianni Pitella, the S&D chairman, Victor Boștinaru and Knut Fleckenstein, Group deputy chairmen, Andi Cristea, the chairman of the Delegation of the Moldova-EU Cooperation Committee, Petras Austrevicius, the rapporteur for Moldova in the European Parliament.

Marian Lupu also had an important discussion with Martin Schulz, the president of the European Parliament, a supporter of Moldova’s European integration.

They talked referred to the steps Moldova had made this year in accordance with the Roadmap, and the steps to be made in the coming months. The Europarliamentarians sent backing messages for Moldova’s adopted reforms and appraisals for the stability enabling the Government to work better.

In Brussels, Marian Lupu has been supported by Social-Democratic colleagues in running for president next month.

Marian Lupu has gone to the Central Election Commission to sign the Conduct Code on unfolding and covering the election campaign, which forbids harming competitors’ dignity and image.

Marian Lupu earlier said he was going to have a fair campaign, focusing on informing citizens and inviting other runners to do the same.