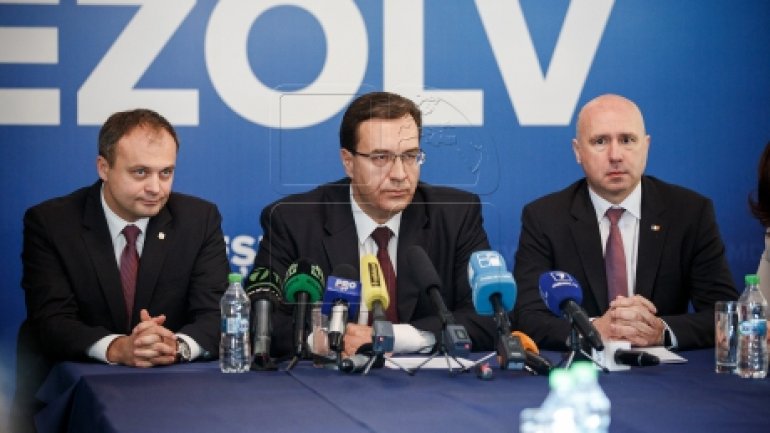 The Parliament Speaker Adrian Candu along with Marian Lupu and Prime Minister Pavel Filip, legislators and mayors, Democrats party colleagues came alongside at the launch of the Platform. Parliament Speaker and Prime Minister said they came to support Marian Lupu and to give a strong signal that only through joint work of state institutions in Moldova a better future can be ensured.

"We need a balanced President, that in times of crisis can make the best decisions to build and not to destroy. the program of Marian Lupu is balanced, covering all important fields, with certain accents -the support of families, economic development, state security" , said Parliament Speaker Adrian Candu.

"If you ask any head of government which is the basic condition for a good governance, that will be the need for stability. Any government in any country needs stability in order to achieve the program, and it is vital for Moldova. That is why we need, more than ever, for a president to maintain a balance in society, that of cooperating with the government and ensure important projects for the country ", was the message of Prime Minister Pavel Filip.

Marian Lupu stressed that its program for the future mandate of the President of Moldova was inspired by the real needs of people and was drafted after the first round of meetings with voters throughout the country. "The project of country that I take as a presidential candidate is Moldova's European modernization.As a future president I want to lead Moldova to a European standard of living" , said Marian Lupu.

Marian Lupu's presidential program is structured in three main areas. The first area is dedicated human capital of the country, where the focus is on education, health, social protection and family protection, culture and church, and the relations with the Diaspora. "I will be a president attentive to social protection of disadvantaged groups - the elderly, children and disabled, the family tradition and therefore measures to strengthen the family in Moldova" ,said Democratic candidate.

In economics, the second aim of the electoral platform of Marian Lupu, PDM candidate is to focus on attracting investments by offering facilities for business and providing an administration capable of developing infrastructure. "I will contribute mightily to open new industrial facilities in Moldova, factories, industrial parks, so that we can have good jobs and stable. I believe that we must give special attention to agriculture. Together with the Government and Parliament are convinced that we will have effective policies here ", said Marian Lupu.

Another important area on which Marian Lupu will work as President is to strengthen the state security. "Fighting corruption is the first task here - is the greatest scourge that undermines the rule and strikes interests of the people", said the leader of the PDM. Regarding national security, Marian Lupu said he is a defender of the neutrality status of our state and believes that this protects Moldova, including in the context of EU integration.

Marian Lupu said he would try to solve the Transnistrian region conflict through its reintegration in Moldova, will support the Government reforms; will do everything to unite society around the common goals, regardless of the ethnicity, for them to see our way to Europe as the most appropriate solution for them.