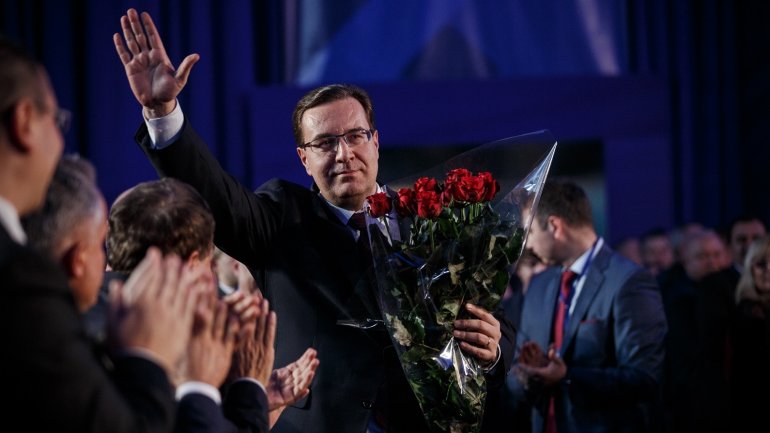 Democratic Party convened today at the eighth congress of the party. During the event, Marian Lupu, PDM urged members to remain united and work together to create a better life for the citizens of our country.

"There were some things of principle. In 2009, when PDM found itself in a difficult situation mostly on objective reasons. No one can predict what will be at the invitation of PDM, I came to this team with an open heart, open and clean thoughts to breathe new life to our team. Our biggest achievement was that PDM was  back in Parliament and since then acts on the forefront of politics in Moldova.

Thanks to everyone in this hall. You're the strength and power of the party. Thank you for being that power. Our strength lies in human resources of a very high quality that you represent. I am proud that during the seven and a half years I had the honor to lead a team so great, beautiful and intelligent, who has done a lot for our country.

Externally, since 2009, PDM was able to obtain full membership in the Socialist International.

A new direction was the consolidation of our state within the European Socialists, a large European family. In 2010 we obtained the observer status at PES. And in June 2015 I became an associate member of PES. PDM is the only party in Moldova that has such status.

All these years have shown a growing trend in the Democratic Party. Determining not only the present but also future lines of development of our country. Do not forget one thing: the one who is given much is required more. I emphasize the responsibility which fell on the shoulders of PDM. From this point let's further promote these economic and social transformations, so that the results will be good to citizens.

Henceforth, we must prepare for 2018 elections. It will not be an easy exercise. But we have gone through situations not easy at all. We have demonstrated our ability to work, outreach. We need to work each in his place to produce good things for our citizens. Similarly, I urge you to keep one thing PDM has, qualities rarely seen in other parties, namely the team spirit and unity. This force will underpin our future political victories at the next election.

It was an honor to be your President for seven years. It will be an honor for me to work together. In PDM not the party serves the presidents, presidents are the ones serving the party.

All forward, unite the Democratic Party into a force!" said Marian Lupu.